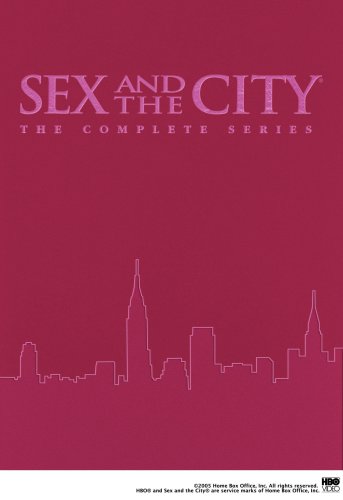 Sex and the City - The Complete Series

Sex and the City - The Complete Series

Editorial Review
Sex and the City is based on Candace Bushnell's provocative bestselling book. Sarah Jessica Parker stars as Carrie Bradshaw, a self-described "sexual anthropologist," who writes "Sex and the City," a newspaper column that chronicles the state of sexual affairs of Manhattanites in this "age of un-innocence." Her "posse," including nice girl Charlotte (Kristin Davis), hard-edged Miranda (Cynthia Nixon), and party girl Samantha (Kim Cattrall)--not to mention her own tumultuous love life--gives Carrie plenty of column fodder. Over the course of the first season's 12 episodes, the most prominent dramatic arc concerns Carrie, who goes from turning the tables on "toxic bachelors" by having "sex like a man" to wanting to join the ranks of "the monogamists" with the elusive Mr. Big (Chris Noth). Meanwhile, Miranda, Cynthia, and Samantha have their own dating woes.

The second season builds on the foundation of the first season with plot arcs that are both hilarious and heartfelt, taking the show from breakout hit to true pop-culture phenomenon. Relationship epiphanies coexist happily alongside farcical plots and zingy one-liners, resulting in emotionally satisfying episodes that feature the sharp kind of character-defining dialogue that seems to have disappeared from the rest of TV long ago. When last we left the NYC gals, Carrie had just broken up with a commitment-phobic Mr. Big (Chris Noth), but fans of Noth's seductive-yet-distant rake didn't have to wait long until he was back in the picture, as he and Carrie tried to make another go of it. Their relationship evolution, from reunion to second breakup, provides the core of the second season. Among other adventures, Charlotte puzzles over whether one of her beaus was "gay-straight" or "straight-gay"; Miranda tries to date a guy who insists on having sex only in places where they might get caught; and Samantha copes with dates who range from, um, not big enough to far too big--with numerous stops in between.

The third season was the charm, as the series earned its first Emmy for Outstanding Comedy Series to go along with its Golden Globes for Best Comedy Series and Best Actress (Parker). One of this season's two principal story arcs concerned hapless-in-love Charlotte and her pursuit of a husband; enter (if only...) Kyle McLachlan as the unfortunately impotent Trey. Meanwhile, Carrie has a brief but memorable fling with a politician who's golden, but not in the way she anticipated. She then...

Last updated: August 04, 2020 at 08:33 EST. Pricing information is provided by the listed merchants. GoSale.com is not responsible for the accuracy of pricing information, product information or the images provided. Product prices and availability is subject to change. Any price and availability information displayed on amazon.com or other merchants at the time of purchase will apply to the purchase of the product. As always, be sure to visit the merchant's site to review and verify product information, price, and shipping costs. GoSale.com is not responsible for the content and opinions contained in customer submitted reviews.