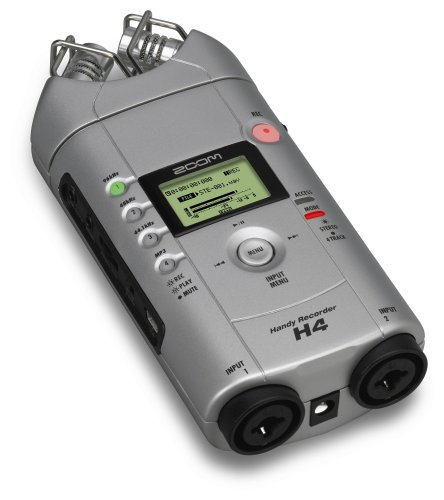 Features:Product Description
The Zoom H4 is more than a handheld recorder - it's a simple way to record high quality audio. It's a full function stereo recorder capable of a wide range of recording rates, from low grade MP3 to 24bit/96K wav files. It also can be used as a portable 4 track recorder AND a USB interface. The built-in microphones & two combo jacks connect your favorite microphones or instruments -- including condensers with 24. With a 2GB SD memory card, the H4 provides up to 380 minutes of recording in 16-bit mode (CD Quality), and 34 hours in MP3 stereo mode. And to move your recordings to a PC or Mac, the H4 includes a USB mass-storage interface. Records 24-bit/96KHz digital audio as well as MP3s, with bitrates up to 320 Kbps Two combination XLR-1/4 input jacks with phantom power Onboard studio effects compression, limiting and mic modeling 1/8 headphone jack provided for monitoring Includes 128MB SD card Up to 380 minutes recording time with 2GB SD memory card Up to 34 hours recording in MP3 stereo mode Combination high-impedance phone inputs for vocals, guitars, bass or keyboards Built-in guitar amp modeling equipment to the Zoom G2 Records directly to your computer as a USB audio interface Comes bundled with Cubase LE - 48-track Digital Audio Workstation software Up to four hours of continuous recording operation from 2 AA batteries

From the Manufacturer
Whether you're recording a live performance, a podcast, a class or workshop, a rehearsal, a songwriting session or even a sizzling performance of your band, the H4 has more recording tools available than any device ever made. Weighing a mere 6.7 ounces (190g), the H4 puts a remarkable amount of recording power in the palm of your hand.

Underneath its sleek exterior are built-in studio effects such as compression, limiting and mic modeling. Use the combination XLR-1/4-inch inputs for external mics, guitars, bass or keyboards. Also onboard are Zoom's most incredible microphone, guitar and bass modeling, accurately reproducing the tone of the most famous microphones and amps ever made. Audio can be recorded as WAV or MP3 files and moved to a computer via USB for easy editing, mixing and mastering.

Last updated: September 26, 2020 at 09:42 EST. Pricing information is provided by the listed merchants. GoSale.com is not responsible for the accuracy of pricing information, product information or the images provided. Product prices and availability is subject to change. Any price and availability information displayed on amazon.com or other merchants at the time of purchase will apply to the purchase of the product. As always, be sure to visit the merchant's site to review and verify product information, price, and shipping costs. GoSale.com is not responsible for the content and opinions contained in customer submitted reviews.