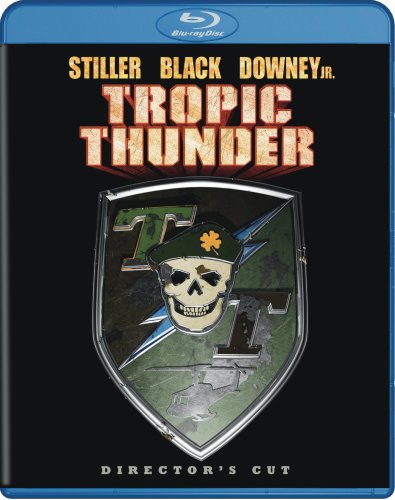 Unrated Director's Cut [Blu-ray] [Blu-ray]
Editorial Review
It's not really a knock to say that nothing in Tropic Thunder is funnier than its first five minutes, so sly that--especially for people watching in theaters--you don't realize right away they are the opening minutes of the movie. This outrageous comedy begins with a series of fake previews, each introducing one of the main characters in the film-proper (not that there's anything proper about this film) and each bearing the familiar logo of a different motion picture studio: Universal, DreamWorks SKG, et al. Such playing fast and loose with corporate talismans verges on sacrilege, but it's an index of how much le tout Tinseltown endorses the movie as a demented valentine to itself. The premise is that the cast of a would-be "Son of Rambo" movie shooting in some Southeast Asian jungle get into a real shooting war with drug-smuggling montagnards. Don't ask--though the movie does have an answer--why such highly paid, usually ultra-pampered personnel as superhero Tugg Speedman (Ben Stiller), Mozart of fart comedy Jeff Portnoy (Jack Black), hip-hop artist Alpa Chino (Brandon T. Jackson), and five-time Oscar-winner Kirk Lazarus from Aus-try-leeah (Robert Downey Jr.) should be running through the jungle unattended and very vulnerable. It matters only that the real-life cast has a high time kidding their own profession and flexing their comedic muscles. Bonus points go to Stiller for co-writing the script (with Justin Theroux) and directing, and to Downey, brilliant as a white actor surgically turned black actor for his role and utterly committed to staying in character no matter what ("I don't drop character till I done the DVD commentary").

Be warned: The movie, too, is committed--to being an equal-opportunity offender. Its political incorrectness extends not only to Lazarus's black-like-me posturing but also Speedman's recent, Sean Penn–style Oscar bid playing a cognitively challenged farmboy--or, in Lazarus's deathless phrase, "going the full retard." Others in the cast include Steve Coogan as a director out of his depth, Nick Nolte as the Viet-vet novelist whose book inspired the film-within-the-film, Matthew McConaughey as Speedman's sun-blissed agent back home, and Tom Cruise--bald, fat-suited, and profane--as an epically repulsive studio head. Two hours running time is a mite excessive, but otherwise, what's not to like --Richard T. Jameson

Set Price Alert
Set Price Alert
Read Reviews
Searching Stores
Found at 0 Stores
Last updated: January 28, 2020 at 14:09 EST. Pricing information is provided by the listed merchants. GoSale.com is not responsible for the accuracy of pricing information, product information or the images provided. Product prices and availability is subject to change. Any price and availability information displayed on amazon.com or other merchants at the time of purchase will apply to the purchase of the product. As always, be sure to visit the merchant's site to review and verify product information, price, and shipping costs. GoSale.com is not responsible for the content and opinions contained in customer submitted reviews.