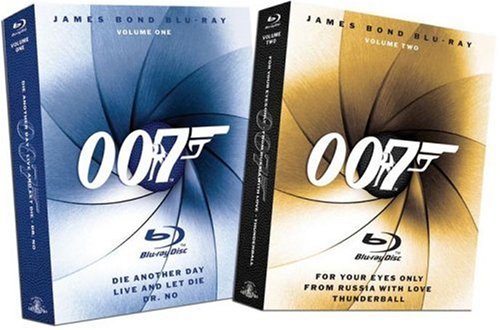 James Bond Blu-ray Collection Six-Pack (Dr. No / Die Another Day / Live and Let Die / For Your Eyes Only / From Russia with Love / Thunderball) (Amazon.com Exclusive) [Blu-ray] James Bond Blu-ray Collection Six-Pack (Dr. No / Die Another Day / Live and Let Die / For Your Eyes Only / From Russia with Love / Thunderball) (Amazon.com Exclusive) [Blu-ray]

Dr. No / Die Another Day / Live and Let Die / For Your Eyes Only / From Russia with Love / Thunderball Amazon.com Exclusive [Blu-ray]
Editorial Review


Released in 1962, this first James Bond movie remains one of the best, and serves as an entertaining reminder that the Bond series began (in keeping with Ian Fleming's novels) with a surprising lack of gadgetry and big-budget fireworks. Sean Connery was just 32 years old when he won the role of Agent 007. In his first adventure James Bond is called to Jamaica where a colleague and secretary have been mysteriously killed. With an American CIA agent (Jack Lord, pre-Hawaii Five-O), they discover that the nefarious Dr. No (Joseph Wiseman) is scheming to blackmail the U.S. government with a device capable of deflecting and destroying U.S. rockets launched from Cape Canaveral. Of course, Bond takes time off from his exploits to enjoy the company of a few gorgeous women, including the bikini-clad Ursula Andress. She gloriously kicks off the long-standing tradition of Bond women who know how to please their favorite secret agent. A sexist anachronism Maybe, but this is Bond at his purest, kicking off a series of movies that shows no sign of slowing down. --Jeff Shannon


Die Another Day
Amazon.com
The 20th James Bond adventure, Die Another Day succeeds on three important fronts: it avoids comparison to Austin Powers by keeping its cheesy humor in check, allows Halle Berry to be sexy and worthy of a spinoff franchise, and keeps pace with the technical wizardry that modern action films demand. Pierce Brosnan's got style and staying power as James Bond, now bearing little resemblance to Ian Fleming's original British super-spy, but able to hold his own at the box office. He's paired with American agent Jinx (Berry) in chasing a genetically altered North Korean villain (Rick Yune) armed with a satellite capable of destroying just about anything. John Cleese and Judi Dench reprise their recurring roles (as "Q" and "M," respectively); they're accompanied by weapons-laden sports cars, a hokey cameo by Madonna (who sings the techno-pulsed theme song), and enough double-entendres to keep Bond-philes adequately shaken and stirred. With...
[+] Read More

Last updated: June 03, 2020 at 15:13 EST. Pricing information is provided by the listed merchants. GoSale.com is not responsible for the accuracy of pricing information, product information or the images provided. Product prices and availability is subject to change. Any price and availability information displayed on amazon.com or other merchants at the time of purchase will apply to the purchase of the product. As always, be sure to visit the merchant's site to review and verify product information, price, and shipping costs. GoSale.com is not responsible for the content and opinions contained in customer submitted reviews.

Find similar products to the James Bond Blu-ray Collection Six-Pack (Dr. No / Die Another Day / Live and Let Die / For Your Eyes Only / From Russia with Love / Thunderball) (Amazon.com Exclusive) [Blu-ray]