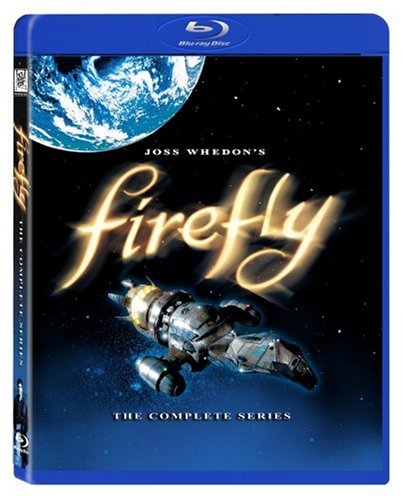 Editorial Review
As the 2005 theatrical release of Serenity made clear, Firefly was a science fiction concept that deserved a second chance. Devoted fans (or "Browncoats") knew it all along, and with this well-packaged DVD set, those who missed the show's original broadcasts can see what they missed. Creator Joss Whedon's ambitious science-fiction Western (Whedon's third series after Buffy the Vampire Slayer and Angel) was canceled after only 11 of these 14 episodes had aired on the Fox network, but history has proven that its demise was woefully premature. Whedon's generic hybrid got off to a shaky start when network executives demanded an action-packed one-hour premiere ("The Train Job"); in hindsight the intended two-hour pilot (also titled "Serenity," and oddly enough, the final episode aired) provides a better introduction to the show's concept and splendid ensemble cast. Obsessive fans can debate the quirky logic of combining spaceships with direct parallels to frontier America (it's 500 years in the future, and embattled humankind has expanded into the galaxy, where undeveloped "outer rim" planets struggle with the equivalent of Old West accommodations), but Whedon and his gifted co-writers and directors make it work, at least well enough to fashion a credible context from the incongruous culture-clashing of past, present, and future technologies, along with a polyglot language (the result of two dominant superpowers) that combines English with an abundance of Chinese slang.

What makes it work is Whedon's delightfully well-chosen cast and their nine well-developed characters--a typically Whedon-esque extended family--each providing a unique perspective on their adventures aboard Serenity, the junky but beloved "Firefly-class" starship they call home. As a veteran of the disadvantaged Independent faction's war against the all-powerful planetary Alliance (think of it as Underdogs vs. Overlords), Serenity captain Malcolm Reynolds (Nathan Fillion) leads his compact crew on a quest for survival. They're renegades with an amoral agenda, taking any job that pays well, but Firefly's complex tapestry of right and wrong (and peace vs. violence) is richer and deeper than it first appears. Tantalizing clues about Blue Sun (an insidious mega-corporation with a mysteriously evil agenda), its ties to the Alliance, and the traumatizing use of Serenity's resident stowaway (Summer Glau) as a guinea pig in the development of advanced warfare were clear indications...

Set Price Alert
Set Price Alert
Read Reviews
Searching Stores
Found at 0 Stores
Last updated: January 21, 2020 at 11:42 EST. Pricing information is provided by the listed merchants. GoSale.com is not responsible for the accuracy of pricing information, product information or the images provided. Product prices and availability is subject to change. Any price and availability information displayed on amazon.com or other merchants at the time of purchase will apply to the purchase of the product. As always, be sure to visit the merchant's site to review and verify product information, price, and shipping costs. GoSale.com is not responsible for the content and opinions contained in customer submitted reviews.

Find similar products to the Firefly: The Complete Series [Blu-ray]