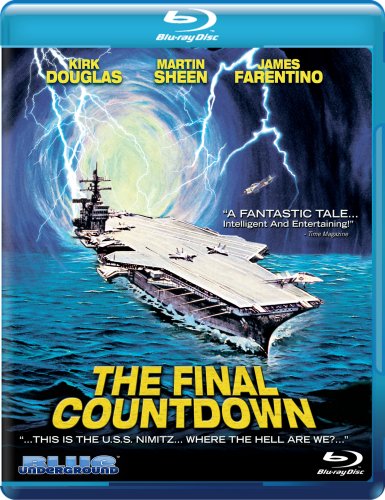 The time is now. The place is aboard the U.S.S. Nimitz, America's mightiest nuclear-powered aircraft carrier on maneuvers in the Pacific Ocean. Suddenly, a freak electrical storm engulfs the ship and triggers the impossible: The Nimitz is hurtled back in time to December 6, 1941, mere hours before the Japanese attack on Pearl Harbor. As the enemy fleet speeds towards Hawaii, the warship's Captain (Kirk Douglas), a Defense Department expert (Martin Sheen), a maverick Air Wing Commander (James Farentino) and a desperate Senator in the Roosevelt administration (Charles Durning) must choose between the unthinkable. Do they allow the Japanese to complete their murderous invasion or launch a massive counter-strike that will forever change the course of history

Katharine Ross and Ron O'Neal co-star in this spellbinding sci-fi action hit filmed on location aboard the U.S.S. Nimitz with the full participation of the U.S. Navy and the ship's crew. Blue Underground is proud to present THE FINAL COUNTDOWN in stunning High Definition with remixed 7.1 DTS-HD and 7.1 Dolby TrueHD soundtracks for the ultimate in explosive home theater excitement.

Editorial Review
With a tantalizing "what-if" scenario and a respectable cast of Hollywood veterans, The Final Countdown plays like a grand-scale episode of The Twilight Zone. It's really no more than that, and time-travel movies have grown far more sophisticated since this popular 1980 release, but there's still some life remaining in the movie's basic premise: What if a modern-era Navy aircraft carrier--in this case the real-life nuclear-powered U.S.S. Nimitz--was caught in an anomalous storm and thrust 40 years backwards in time to the eve of Japan's attack on Pearl Harbor Will the ship's commander (Kirk Douglas) interfere with history Will the visiting systems analyst (Martin Sheen) convince him not to Will a rescued senator from 1941 (Charles Durning) play an unexpected role in the future of American politics Veteran TV director Don Taylor doesn't do much with the ideas posed by this potentially intriguing plot; he seems more interested in satisfying aviation...

Last updated: January 17, 2021 at 19:00 EST. Pricing information is provided by the listed merchants. GoSale.com is not responsible for the accuracy of pricing information, product information or the images provided. Product prices and availability is subject to change. Any price and availability information displayed on ebay.com or other merchants at the time of purchase will apply to the purchase of the product. As always, be sure to visit the merchant's site to review and verify product information, price, and shipping costs. GoSale.com is not responsible for the content and opinions contained in customer submitted reviews.

Find similar products to the The Final Countdown [Blu-ray]