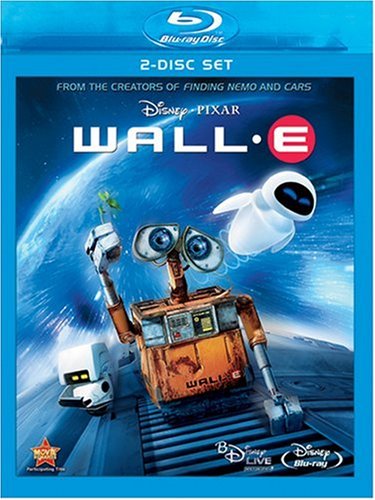 Two-Disc and BD Live [Blu-ray]
Product Description
The highly acclaimed director of FINDING NEMO and the creative storytellers behind CARS and RATATOUILLE transport you to a galaxy not so far away for a new cosmic comedy adventure about a determined robot named WALL-E. After hundreds of lonely years of doing what he was built for, the curious and lovable WALL-E discovers a new purpose in life when he meets a sleek search robot named EVE. Join them and a hilarious cast of characters on a fantastic journey across the universe. Transport yourself to a fascinating new world with Disney-Pixar's latest adventure, now even more astonishing on DVD and loaded with bonus features, including the exclusive animated short film BURN-E. WALL-E is a film your family will want to enjoy over and over again.

Editorial Review
Pixar genius reigns in this funny romantic comedy, which stars a robot who says absolutely nothing for a full 25 minutes yet somehow completely transfixes and endears himself to the audience within the first few minutes of the film. As the last robot left on earth, Wall-E (voiced by Ben Burtt) is one small robot--with a big, big heart--who holds the future of earth and mankind squarely in the palm of his metal hand. He's outlasted all the "Waste Allocation Load Lifter Earth-Class" robots that were assigned some 700 years ago to clean up the environmental mess that man made of earth while man vacationed aboard the luxury spaceship Axiom. Wall-E has dutifully gone about his job compacting trash, the extreme solitude broken only by his pet cockroach, but he's developed some oddly human habits and ideas. When the Axiom sends its regularly scheduled robotic EVE probe (Elissa Knight) to earth, Wall-E is instantly smitten and proceeds to try to impress EVE with his collection of human memorabilia. EVE's directive compels her to bring Wall-E's newly collected plant sprout to the captain of the Axiom and Wall-E follows in hot pursuit. Suddenly, the human world is turned upside down and the Captain (Jeff Garlin) joins forces with Wall-E and a cast of other misfit robots to lead the now lethargic people back home to earth. Wall-E is a great family film with the most impressive aspect being the depth of emotion conveyed by a simple robot--a machine typically considered devoid of emotion, but made so absolutely touching by the magic of Pixar animation. Also well-worth admiring are the sweeping views from space, the creative yet disturbing vision of what strange...
[+] Read More

Last updated: September 26, 2020 at 09:41 EST. Pricing information is provided by the listed merchants. GoSale.com is not responsible for the accuracy of pricing information, product information or the images provided. Product prices and availability is subject to change. Any price and availability information displayed on amazon.com or other merchants at the time of purchase will apply to the purchase of the product. As always, be sure to visit the merchant's site to review and verify product information, price, and shipping costs. GoSale.com is not responsible for the content and opinions contained in customer submitted reviews.