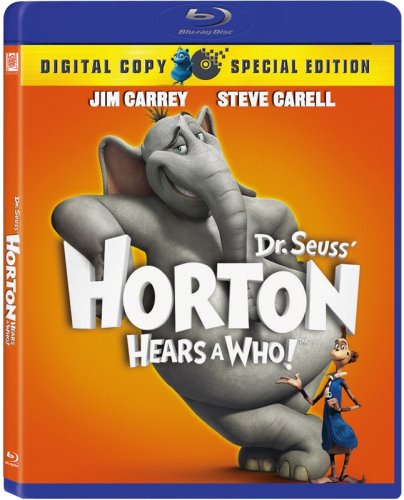 Horton Hears a Who! [Blu-ray]

Horton Hears a Who! [Blu-ray]

**Directors' Audio Commentary ( Jimmy Hayward, Steve Martino) **Actors' Audio Commentary (Jim Carrey, Steve Carell) **Ice Age Short: Surviving Sid **Watch Horton Hears a Who! with a Who **Beyond Animation **The Voice of Horton: Jim Carrey **That's One Big Elephant **The Genesis of Katie **Your World is Changing, Too! **How Does Horton Hear **A Person is a Person - Practical Life Lessons **Is It Seuss

Editorial Review
Dr. Seuss's classic 1954 book Horton Hears a Who has entertained generations of children and served as the inspiration for a 26-minute, 1970 television special Dr. Seuss's Horton Hears a Who and the 2000 Broadway musical Seussical: The Musical. This 2008, full-length animated movie features the voice talents of Jim Carrey as Horton, Steve Carrell as the Mayor of Whoville, Carol Burnett as the Kangaroo, and Jesse McCartney as JoJo and promises to delight a whole new generation of children and their parents and grandparents. The technological wonders of computer animation have allowed 20th Century Fox Animation to bring to life the wacky, colorful Whoville with its minute inhabitants and the lush Jungle of Nool with its host of distinctive animals and the result is a rich, fantastical world of wonder worthy of Dr. Seuss' own imagination. All the major plot elements of Dr. Seuss' book are present, with Horton hearing the faint cry for help from a tiny dust speck atop a small clover and doing his best to protect the inhabitants of that small civilization of Whoville despite the disbelief, disdain, and persecution of his fellow animals. The feel of Dr. Seuss' original rhyming prose is partially preserved in the sparse narration by Charles Osgood that's interspersed throughout the film's dialogue and the overarching themes of staying true to one's convictions and the celebration of the power of perseverance, imagination, and kindness come through loud and clear. Horton Hears a Who is a fun rendering of a classic Dr. Seuss story that's sure to entertain viewers of all ages. --Tami Horiuchi

Last updated: January 22, 2021 at 07:55 EST. Pricing information is provided by the listed merchants. GoSale.com is not responsible for the accuracy of pricing information, product information or the images provided. Product prices and availability is subject to change. Any price and availability information displayed on merchants at the time of purchase will apply to the purchase of the product. As always, be sure to visit the merchant's site to review and verify product information, price, and shipping costs. GoSale.com is not responsible for the content and opinions contained in customer submitted reviews.

Find similar products to the Horton Hears a Who! [Blu-ray]