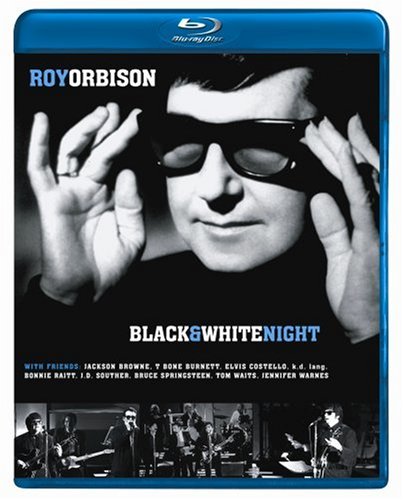 Editorial Review
Few early rockers were more gifted or less honored in their prime than the late Roy Orbison, whose vaulting tenor and vulnerable love songs conjured heartbreak and desire with operatic intensity. This 1987 concert special, originally broadcast on Showtime, came two decades after Orbison had retreated from pop's front lines, yet neither Orbison nor his music coasts on mere nostalgia: in every respect, A Black and White Night survives as a triumphant performance and a superb video production, as well as a first-rate retrospective of Orbison's hits.

Filmed in black and white against the streamlined art deco stage of the since-demolished Coconut Grove in downtown Los Angeles, the concert is buoyed by a remarkable cast of A-list Orbison fans who signed on as his accompanists. Under the direction of producer T-Bone Burnett, the stage band thus includes Jackson Browne, Burnett, Elvis Costello, k.d. lang, Bonnie Raitt, J.D. Souther, Bruce Springsteen, Tom Waits, and Jennifer Warnes, along with the rhythm section from Elvis Presley's fabled late '60s and early '70s touring band. That astonishing lineup is all the more noteworthy for the restraint with which they collaborate--it's evident that those superstars came to honor Orbison, not upstage him, resulting in a gratifying cohesion to the performances.

Orbison himself sounds as powerful as ever, his soaring falsetto cresting as dramatically as it did on the studio versions of the hits that inevitably dominate. Those songs meanwhile confirm that his blue chip admiration society came as much for the caliber of his writing as...

Last updated: October 27, 2020 at 13:31 EST. Pricing information is provided by the listed merchants. GoSale.com is not responsible for the accuracy of pricing information, product information or the images provided. Product prices and availability is subject to change. Any price and availability information displayed on amazon.com or other merchants at the time of purchase will apply to the purchase of the product. As always, be sure to visit the merchant's site to review and verify product information, price, and shipping costs. GoSale.com is not responsible for the content and opinions contained in customer submitted reviews.