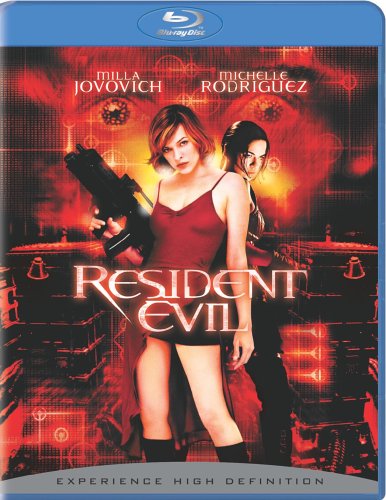 Editorial Review
Marilyn Manson worked on the soundtrack, so it's no surprise that Resident Evil is best enjoyed by headbangers, goth guys, and PlayStation junkies. Like the interactive game it's based on, this horror hybrid pits a small band of SWAT-like commandos (including Milla Jovovich and Girlfight's Michelle Rodriguez) against a ravenous hoard of zombies, resulting in a gorefest that only sociopaths could love. The tenacious heroes are trapped inside the Hive--an underground complex where an evil corporation conducts illegal research with a deadly virus--and the zombies (reanimated corpses of sacrificed employees) are fodder for endless rounds of gunfire. It's utter nonsense (not unlike director Paul W.S. Anderson's previous Event Horizon), so your best defense is to wallow in it or avoid this trash altogether. A few cool sequences are borrowed from better films (that slice-and-dice laser is cribbed from the 1998 Canadian shocker Cube), but if you're in the mood for heavy-metal carnage, this movie's for you. --Jeff Shannon

Set Price Alert
Set Price Alert
Read Reviews
Searching Stores
Found at 0 Stores
Last updated: January 28, 2020 at 14:52 EST. Pricing information is provided by the listed merchants. GoSale.com is not responsible for the accuracy of pricing information, product information or the images provided. Product prices and availability is subject to change. Any price and availability information displayed on amazon.com or other merchants at the time of purchase will apply to the purchase of the product. As always, be sure to visit the merchant's site to review and verify product information, price, and shipping costs. GoSale.com is not responsible for the content and opinions contained in customer submitted reviews.