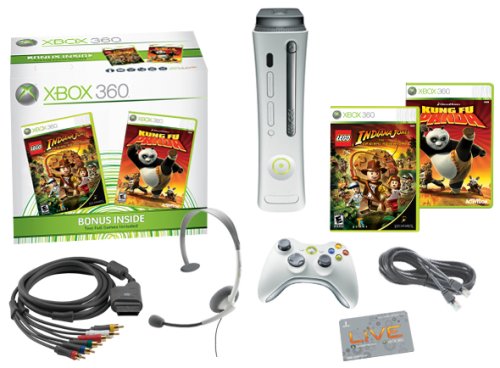 Under the Hood
Xbox 360 is much smaller than its predecessor--it measures approximately 3.3 by 12.2 by 10.2 inches and weighs 7.7 lbs. It's powered by custom IBM PowerPC-based CPU with three symmetrical cores each running at 3.2 GHz. It also carries a custom ATI graphics processor loaded with 10 MB of embedded DRAM, 48-way parallel floating-point dynamically scheduled shader pipelines and Unified shader architecture. This is powerful enough to draw 500 million triangles per second. In other words, it makes for great looking games in standard TV definition, and even better thanks to built-in support for HDTV 1080i televisions. It also supports the widescreen 16:9 format.

The unit has a 12x dual-layer DVD-ROM drive, which plays both the game media and progressive-scan DVD movies right out of the box. For game-save and media storage, users can choose between the detachable and upgradeable 60GB hard drive, or a separately sold 64MB flash Memory Unit. Along with storing files, the hard drive will make the Xbox 360 backward-compatible with part of the existing Xbox game library.

Control your Gameplay
Xbox 360 uses a refined button layout for its controllers. Back and Start buttons sit at the center of the controller and between them is a new Xbox Guide button, which instantly takes the user to the Xbox 360 user interface. From there, they can check for friends online, access personal digital content like photos and songs, and more. The black and white buttons of the first Xbox controllers have been replaced with new shoulder buttons placed above the left and right triggers. Xbox 360 can accommodate up to four wireless controllers and has three USB 2.0 slots to use for wired controllers or for streaming your digital media from digital cameras, MP3 players, and any Windows XP-based PC. Microsoft has also created a video-conferencing camera, sold separately, that will work with the system.Xbox 360 can manage your games, your...

Set Price Alert
Set Price Alert
Searching Stores
Found at 0 Stores
Last updated: February 17, 2020 at 04:37 EST. Pricing information is provided by the listed merchants. GoSale.com is not responsible for the accuracy of pricing information, product information or the images provided. Product prices and availability is subject to change. Any price and availability information displayed on amazon.com or other merchants at the time of purchase will apply to the purchase of the product. As always, be sure to visit the merchant's site to review and verify product information, price, and shipping costs. GoSale.com is not responsible for the content and opinions contained in customer submitted reviews.