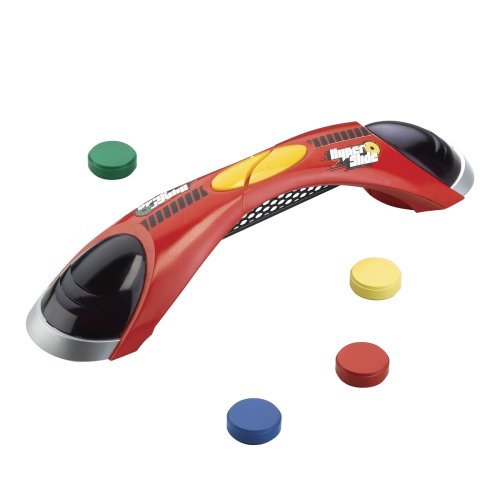 Features:Product Description
Be quick as you flick, slide or shoot the different-colored hyper discs under the arch. As the game unit calls out the sequence of colors for you to pass, the game "knows" if you've passed the right disc or not. Pass 'em fast before the buzzer blasts! Obey the voice commands, get your brain in the game and break the code, or guess which color will be called next. Play with a friend or practice solo.

Tabletop slide-and-pass excitement features electronic lights and sounds, plus an announcer's voice that talks you through three fast-sliding game modes. Electronic game unit comes with four Hyper Discs, each a different color; plus Hyper Band and instructions. Requires 3 "AA" batteries (not included). For 1 or 2 players.

Editorial Review
.caption { font-family: Verdana, Helvetica neue, Arial, serif; font-size: 10px; font-weight: bold; font-style: italic; } ul.indent { list-style: inside disc; text-indent: -15px; } Be quick, pick the right colored hyper disc, and flick it under the arch before time runs out. The Hyper Slide from Hasbro packs three fast-paced electronic table-top games into one compact unit. Recommended for ages eight and up, these fast-sliding games for one or two players are fun and exciting for kids and adults.

The hyper discs can be conveniently stored in a compartment on the side of the arch. View larger.

Three fast-paced electronic table-top games in one stylish unit. View larger.Fun, Futuristic Table Top Game
With its sleek, arched design, Hyper Slide looks like a futuristic game. Resembling a hockey game for a table top, the object is to flip the pucks through the goal. However, in these games the goal can be scored from both sides of the arch, and there are four different-colored pucks, called hyper discs. The game's electronic unit calls out a color, and you must pick that color and sent it through the arc. It automatically detects whether you've passed the right disc or not. When not in operation, the hyper discs can be conveniently stored in a compartment on the side of the arch.

Three Games for Solo Play or Two-Person Play
The Hyper Slide offers a few variations of play for your enjoyment. Two lighted buttons on the top of the Hyper Slide make it easy to choose which of the three games you want to play.

While the objects of...

Last updated: February 25, 2020 at 17:02 EST. Pricing information is provided by the listed merchants. GoSale.com is not responsible for the accuracy of pricing information, product information or the images provided. Product prices and availability is subject to change. Any price and availability information displayed on amazon.com or other merchants at the time of purchase will apply to the purchase of the product. As always, be sure to visit the merchant's site to review and verify product information, price, and shipping costs. GoSale.com is not responsible for the content and opinions contained in customer submitted reviews.