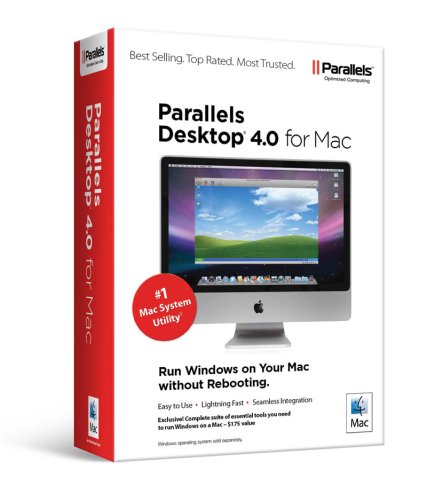 Features:Product Description
Run Windows on your Mac without rebooting. Parallels Desktop 4.0 for Mac makes it easy to run Windows, Linux, and more side-by-side with Mac OS X without rebooting. With Parallels' award winning virtualization technology, you can run Mac OS X and critical Windows applications such as Outlook, Access, QuickBooks, Internet Explorer and more, all at the same time. This new release of Parallels Desktop for Mac comes packed with 50+ new features and enhancements including the ability to drag-and-drop files between desktops, run Windows programs like native Mac applications and migrate your existing PC to your Mac. And with the Installation Wizard to help you get started, you'll be up and running in just three clicks of the mouse.

Editorial Review
With more than 1 million users worldwide, the award-winning Parallels Desktop for Mac is easier than ever to use with its brand new Mac user interface and lightning-fast performance. This new version is packed with dozens of new features that make running Windows programs on a Mac completely seamless.

Run Windows on Your Mac the Easy Way. Right Alongside Mac OS X.
Parallels Desktop for Mac makes it possible to run Windows XP or Vista, Linux, and more side-by-side with Mac OS X without rebooting. With Parallels' award-winning...

Last updated: September 24, 2020 at 02:28 EST. Pricing information is provided by the listed merchants. GoSale.com is not responsible for the accuracy of pricing information, product information or the images provided. Product prices and availability is subject to change. Any price and availability information displayed on amazon.com or other merchants at the time of purchase will apply to the purchase of the product. As always, be sure to visit the merchant's site to review and verify product information, price, and shipping costs. GoSale.com is not responsible for the content and opinions contained in customer submitted reviews.

Find similar products to the Parallels Desktop 4.0 for Mac