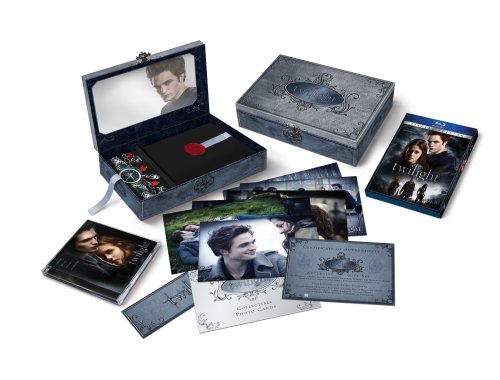 Ultimate Collector's Set Amazon.com Exclusive [Blu-ray]
Description
Bella Swan (Kristen Stewart) doesn’t expect much when she moves to the small town of Forks, Washington, until she meets the mysterious and handsome Edward Cullen (Robert Pattinson)—a boy who’s hiding a dark secret: he’s a vampire. As their worlds and hearts collide, Edward must battle the bloodlust raging inside him as well as a coterie of undead that would make Bella their prey. Based on the #1 New York Times best-selling sensation by Stephenie Meyer, Twilight adds a dangerous twist to the classic story of star-crossed lovers.


Editorial Review
The big-screen adaptation of Twilight, Stephenie Meyer's bestselling vampire romance, is aimed squarely at its key demographic: teen girls whose idea of Prince Charming is a brooding, pale, undead teen who could kill you instantly at any moment. Such a prince is more fascinating than frightening to new girl Bella Swan (Kristen Stewart), who moves to the rainy-gray town of Forks, Wash., to live with her dad (Billy Burke), the local sheriff who's puzzled by a series of "animal attacks." On her first day at school, Bella appears to (visibly) nauseate her lab partner, Edward (Robert Pattinson). Turns out the scent of her blood is this vampire's "brand of heroin," and his struggle not to kill her causes an irresistible pull toward her. Whether he's attracted for the normal reasons or because she smells especially sweet to him is vague in the book and even less clear on-screen; nonetheless, Bella falls hopelessly in love with Edward, which sets her on a dangerous path when a few nomad vampires show up in town, one particularly keen on tracking the human....

Last updated: January 24, 2021 at 01:04 EST. Pricing information is provided by the listed merchants. GoSale.com is not responsible for the accuracy of pricing information, product information or the images provided. Product prices and availability is subject to change. Any price and availability information displayed on merchants at the time of purchase will apply to the purchase of the product. As always, be sure to visit the merchant's site to review and verify product information, price, and shipping costs. GoSale.com is not responsible for the content and opinions contained in customer submitted reviews.