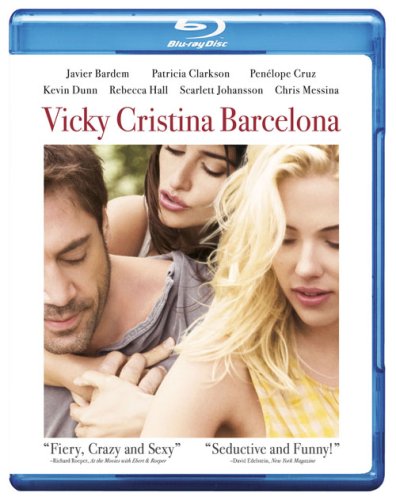 Product Description
Oscar winner Javier Bardem (No Country for Old Men), Oscar nominee Penelope Cruz (Volver) and Golden Globe nominee Scarlett Johansson (The Nanny Diaries) light up the stunning city of Barcelona in this sexy romantic comedy. Vicky and Cristina are two young Americans spending a summer in Spain, who meet a charming Casanova and his beautiful but volatile ex-wife. When they all become romantically entangled, the smoldering sparks begin to fly in hilarious fashion. Critics rave, Vicky Cristina Barcelona is one of Woody Allen s finest films, with bravura performances from its incredible cast (Jeffrey Lyons, Reel Talk/NBC).

Editorial Review
It must be true that getting out of town can do a fellow a lot of good, because Vicky Cristina Barcelona is the best movie Woody Allen has made in years. Okay, you're right, 2006's Match Point already claimed that honor and, as Allen's first film made in England, established the virtues of getting away from overfamiliar territory (namely Manhattan). But the Woodman's first film made in Spain matches the ice-cold Match Point for crisp authority, and yields a good deal more sheer pleasure besides. Rebecca Hall (Vicky) and Scarlett Johansson (Cristina) play two young Americans, best friends, spending a summer in Catalonia. Vicky is going for a master's in "Catalan identity" (though her Spanish is shaky); Cristina is going along for, oh, just about anything. That soon includes celebrated abstract artist Juan Antonio (Javier Bardem), who's anything but abstract in his forthright proposition that the two join him in his private plane, his travels, and his bed. That he has an insane ex-wife, Maria Elena (Penélope Cruz), who may or may not have tried to kill him is not really an issue until the wife reappears and ... well, consider the possibilities.

Vicky Cristina Barcelona isn't exactly a comedy, at least not in the manner of Allen's "early, funny ones," but it's informed by a rueful wit that finds its fullest expression in reflective voiceover commentary. Spoken by Christopher Evan Welch, but surely on behalf of the 73-year-old auteur, this element of the film is neither (as some have charged) patronizing nor uncinematic; rather, it's integral to the movie's participation in a venerable European literary tradition, the sentimental education. Instead of Bergman or Fellini, this time Allen is invoking the François Truffaut of Jules and Jim and Eric Rohmer in his many meditations on the game of love. The entire...

Last updated: May 28, 2020 at 16:07 EST. Pricing information is provided by the listed merchants. GoSale.com is not responsible for the accuracy of pricing information, product information or the images provided. Product prices and availability is subject to change. Any price and availability information displayed on amazon.com or other merchants at the time of purchase will apply to the purchase of the product. As always, be sure to visit the merchant's site to review and verify product information, price, and shipping costs. GoSale.com is not responsible for the content and opinions contained in customer submitted reviews.