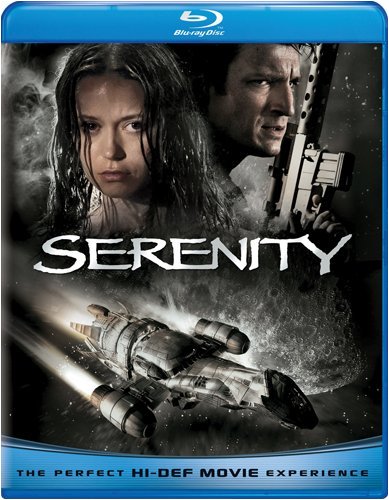 Editorial Review
Serenity offers perfect proof that Firefly deserved a better fate than premature TV cancellation. Joss Whedon's acclaimed sci-fi Western hybrid series was ideally suited (in Browncoats, of course) for a big-screen conversion, and this action-packed adventure allows Whedon to fill in the Firefly backstory, especially the history and mystery of the spaceship Serenity's volatile and traumatized stowaway, River Tam (Summer Glau). Her lethal skills as a programmed "weapon" makes her a coveted prize for the power-hungry planetary Alliance, represented here by an Operative (Chiwetel Ejiofor) who'll stop at nothing to retrieve River from Serenity's protective crew. We still get all the quip-filled dialogue and ass-kicking action that we've come to expect from the creator of Buffy the Vampire Slayer, but Whedon goes a talented step further here, blessing his established ensemble cast with a more fully-developed dynamic of endearing relationships. Serenity's cast is led with well-balanced depth and humor by Nathan Fillion as Captain Mal Reynolds, whose maverick spirit is matched by his devotion to crewmates Wash (Alan Tudyk), Zoe (Gina Torres), fun-loving fighter Jayne (Adam Baldwin), engineer Kaylee (Jewel Staite), doctor Simon (Sean Maher), and Mal's former flame Inara (Morena Baccarin), who plays a pivotal role in Whedon's briskly-paced plot. As many critics agreed, Serenity offered all the fun and breezy excitement that was missing from George Lucas's latter-day Star Wars epics, and Whedon leaves an opening for a continuing franchise that never feels cheap or commercially opportunistic. With the mega-corporate mysteries of Blue Sun yet to be explored, it's a safe bet we haven't seen the last of the good ship Serenity. --Jeff Shannon

Last updated: October 21, 2020 at 18:59 EST. Pricing information is provided by the listed merchants. GoSale.com is not responsible for the accuracy of pricing information, product information or the images provided. Product prices and availability is subject to change. Any price and availability information displayed on amazon.com or other merchants at the time of purchase will apply to the purchase of the product. As always, be sure to visit the merchant's site to review and verify product information, price, and shipping costs. GoSale.com is not responsible for the content and opinions contained in customer submitted reviews.