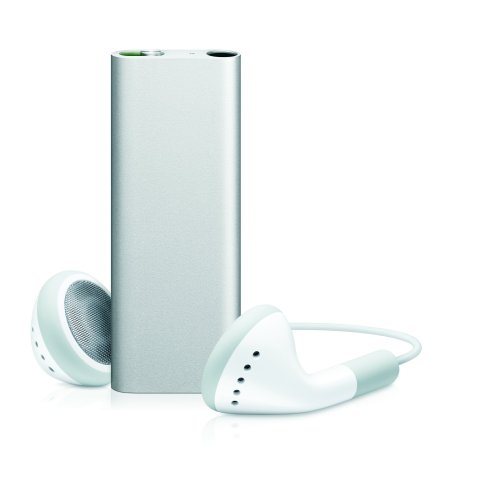 3rd Generation, released Spring 2009.
Also available in black
Features:Editorial Review
The third-generation iPod shuffle is the talk of the music world. Not just because it's incredibly small--half the size of the previous generation. And not just because it holds up to 1,000 songs and supports multiple playlists. It's the talk of the town because it's the only music player in the world that talks to you. The new VoiceOver feature lets iPod shuffle tell you what song is playing and who's performing it. It also tells you the names of your playlists. With VoiceOver--and with the controls conveniently located on the earbud cord--it's even easier to navigate your music. You can do it without taking your eyes off your run, your ride, or whatever you're doing.

The iPod shuffle 3G is the first music player that talks to you. Click to enlarge.


Ultra-Compact, Ultra-Sleek
Its compact, anodized aluminum design is nearly half the size of the previous iPod shuffle and smaller than a AA battery. But don't be fooled by its diminutive nature. It might be small on the outside, but it holds a lot on the inside. With iPod shuffle now available in 4 GB capacity, you can take up to 1,000 songs with you anywhere. And with the controls located where you can quickly access them, it's also easier to use.

Most Wearable
The iPod shuffle comes with a brilliant stainless steel clip that lets you securely wear your music no matter where you are. Clip it to your workout gear when you're at the gym. Clip it to your backpack or belt when you're on the go. If you want, you can even clip it out of sight. Whether you're walking, running, cycling, or skiing, you'll always have your favorite songs and...

Last updated: August 04, 2020 at 23:33 EST. Pricing information is provided by the listed merchants. GoSale.com is not responsible for the accuracy of pricing information, product information or the images provided. Product prices and availability is subject to change. Any price and availability information displayed on amazon.com or other merchants at the time of purchase will apply to the purchase of the product. As always, be sure to visit the merchant's site to review and verify product information, price, and shipping costs. GoSale.com is not responsible for the content and opinions contained in customer submitted reviews.