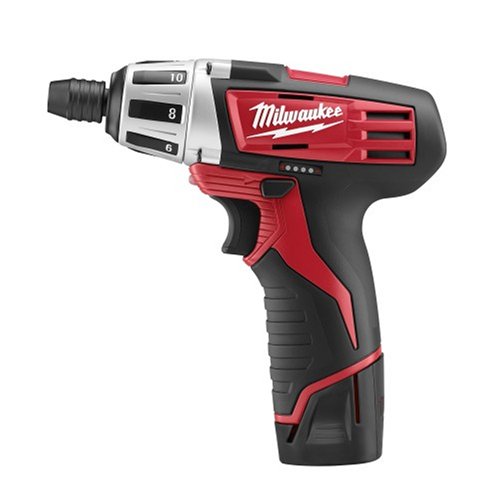 Amazon.com Product Description
The all-NEW Milwaukee M12 LITHIUM-ION Screwdriver is the next generation of cordless power. Armed with Quick Bit-Loading 1/4" hex chuck for bit insertion and one-handed release, this is a must-have in any tool arsenal. Part of the seamless M12 LITHIUM-ION Cordless System, the M12 Screwdriver has increased the number of useful features without cutting the power.

The Milwaukee M12 LITHIUM-ION Screwdriver has unbelievable balance to reduce strain and tension. The most compact screwdriver in its class, the M12 Screwdriver packs a punch without the bulge and slow recharge time of other leading brands.

Quick bit-loading 1/4" hex chuck for bit insertion and release with one hand.

Milwaukee LITHIUM-ION Battery
Milwaukee is the leader in...

Last updated: January 16, 2021 at 16:14 EST. Pricing information is provided by the listed merchants. GoSale.com is not responsible for the accuracy of pricing information, product information or the images provided. Product prices and availability is subject to change. Any price and availability information displayed on ebay.com or other merchants at the time of purchase will apply to the purchase of the product. As always, be sure to visit the merchant's site to review and verify product information, price, and shipping costs. GoSale.com is not responsible for the content and opinions contained in customer submitted reviews.