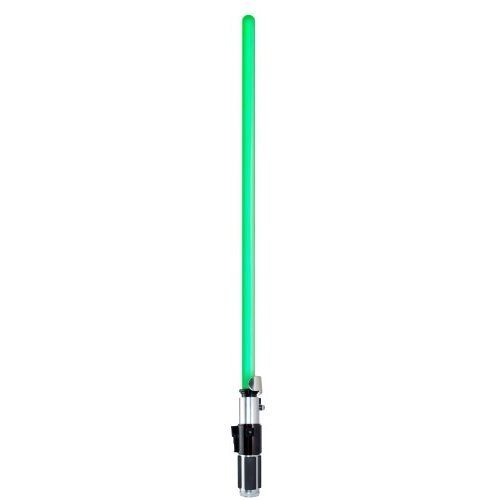 Features:Product Description
Since Master Replicas released the very first Force FX Lightsaber in 2002, fans have been clamoring for a Yoda Force FX. Unfortunately, due to the small size of Yoda's hilt, Master Replicas' team of product designers and engineers have been unable to fit all of the necessary light and sound technology in place to create a "realistic" Yoda FX that would live up to the standards of its' predecessors - that is, until now! With recent breakthroughs in Force FX technology, we are pleased to announce that the Yoda Force FX Lightsaber has become a reality!

Since Yoda was created digitally for the prequel trilogy, his lightsaber was also a digital construct. And so, Lucasfilm once again granted Master Replicas engineers access to the ILM computer files and reference images, allowing for the creation of the most authentic, realistic Force FX lightsaber possible. While the Yoda Force FX Lightsaber is smaller than anything released to date - measuring roughly 33-inches (including the blade), versus average Force FX which measures 44 inches - remember, as Yoda taught us, "Size Matters Not!"
And of course, the Yoda Force FX features:

ú A durable metal hilt looks and feels like a real lightsaber.

ú A sturdy blade is permanently attached to the hilt.

Add the weapon of the greatest Jedi in the Galaxy - wise, old Master Yoda - to your collection today!

Last updated: July 03, 2020 at 07:30 EST. Pricing information is provided by the listed merchants. GoSale.com is not responsible for the accuracy of pricing information, product information or the images provided. Product prices and availability is subject to change. Any price and availability information displayed on amazon.com or other merchants at the time of purchase will apply to the purchase of the product. As always, be sure to visit the merchant's site to review and verify product information, price, and shipping costs. GoSale.com is not responsible for the content and opinions contained in customer submitted reviews.