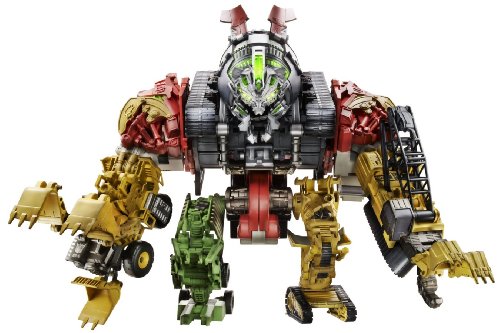 Features:Product Description
The ultimate Decepticon weapon has arrived on Earth, and nothing will ever be the same. Constructicon Devastator is the biggest robot, ever - towering above Autobots and Decepticons alike. As his Vortex Grinder snaps open and glows with power, all before him quake in fear, knowing the destruction is inevitable!

Editorial Review
One of the biggest Transformers toys ever made, the Constructicon Devastator brings the power of the Decepticons to your home. Having appeared in the summer blockbuster Transformers: Revenge of the Fallen, Devastator can disassemble into six, smaller, fully functional Transformer vehicles. With its motion-activated sounds and movie-accurate detail, this toy is a must-have for any Transformers collector, ages five years and older.

The Good: A large, detailed Transformer toy that's six toys in one.

The Challenging: Tough vehicle-to-robot conversion may be too much of a challenge for younger children.

In a Nutshell: A massive Transformers toy that does justice to its movie inspiration; great for young fans and older collectors alike.


Pulling a lever will cause Devastator's "Vortex Grinder" to open and light up.


At over a foot in height, Devastator is one of the largest Transformers toys ever made.
Your Own Transformers Experience
Staying true to the movie, Devastator is massive, standing well over a foot in height and dwarfing most other Transformers toys. He is a solid, heavy, and well-built toy. Pulling a lever on his chest causes his mouth (called the Vortex Grinder) to light up with bright, neon-green LED lights. The lever also triggers battle sounds and quotes taken straight from the movie.

Devastator isn't the most flexible toy around. Because of his size, he can be a bit cumbersome to play with. However, his elbows and knees are articulated, which makes him easier to position and balance. He also has realistic details, which gives him value as a...
[+] Read More

Last updated: July 10, 2020 at 05:20 EST. Pricing information is provided by the listed merchants. GoSale.com is not responsible for the accuracy of pricing information, product information or the images provided. Product prices and availability is subject to change. Any price and availability information displayed on amazon.com or other merchants at the time of purchase will apply to the purchase of the product. As always, be sure to visit the merchant's site to review and verify product information, price, and shipping costs. GoSale.com is not responsible for the content and opinions contained in customer submitted reviews.