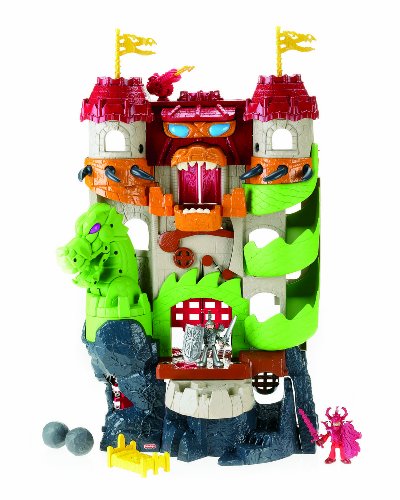 Features:Editorial Review
The Fisher Price Dragon World Fortress will transport your child to a fantasy realm of magic, knights, and dragons. Designed for ages 3 and up, this play set features flashing lights, sound effects, and accessories that can provide hours of imaginative role-playing. Standout features include a moving guard dragon, a cannon that shoots projectiles, and a secret lever that will make the castle "come to life."

The Good: Exciting fantasy theme that encourages imagination and role-playing.

The Challenging: A bit top-heavy; could be easy to tip over.

In a Nutshell: A large, well-designed play set that encourages creativity and role-playing.
A Medieval Adventure
At approximately two feet in height, Dragon World Fortress is filled with enough interactive features to keep active imaginations occupied. The play set comes with two knight figures, each with their own detachable sword, shield and armor. With these figures your child can pivot "activation points" on the play set, which can reveal hidden staircases and open the front gate.

Knights who dare to enter the Dragon World Fortress face many dangers. Pulling a lever on the back of the castle will cause the green guard dragon to lunge forward and attack intruders. The lever also triggers thunder sound effects and causes the entire castle to light up. There is also a cannon that fires plastic projectiles, and a rolling boulder that can be used to defend the staircases.

The fortress is constructed in solid, sturdy plastic. Parents, be aware that it is fairly easy to topple over due to its vertical design. However, this problem is remedied by folding out the hidden set of stairs underneath the castle, giving it the stability needed for rougher play.

Encourages Imagination
Dragon World Fortress channels a spirit of medieval adventure. It is full of movable objects and sounds, but still leaves plenty of room for constructive, imaginative play. The play set provides children with the tools needed for an immersive, imaginative experience.

Last updated: February 28, 2020 at 07:17 EST. Pricing information is provided by the listed merchants. GoSale.com is not responsible for the accuracy of pricing information, product information or the images provided. Product prices and availability is subject to change. Any price and availability information displayed on amazon.com or other merchants at the time of purchase will apply to the purchase of the product. As always, be sure to visit the merchant's site to review and verify product information, price, and shipping costs. GoSale.com is not responsible for the content and opinions contained in customer submitted reviews.