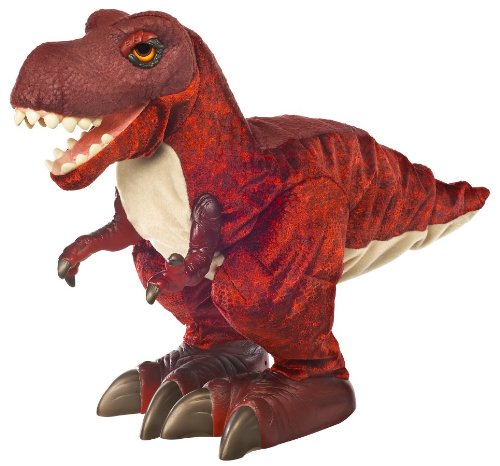 Features:Product Description
Soft and snuggly dinosaur figure responds to your touch with lifelike movements and sound.Unleash him from his box and he's ready to walk.Touch his back and he'll stomp, roar and purr his way into your heart. Moving his arms and head like a real dino. This mischievous MONTY REX dinosaur pet sniffs and sneezes too. This cuddly creature plays three rockin' dino tunes. And when it's time to "feed" him, he even chomps.

Editorial Review
Your child will be thrilled with Playskool Kota and Pals Monty T-Rex--especially when he roars at the friendly dinosaur and gets a louder roar in return. An interactive, animated dinosaur, Monty T-Rex stomps, roars, sniffs and sneezes, plays music, and even burps after being fed a big meal. Designed for ages three and up, this fun-loving dinosaur is ideal for both younger and older children since it is so versatile in its interactive, role-playing abilities.


The Good: Provides role-playing and interactive play for both younger and older children.

The Challenging: Heavy toy that could be damaged if it falls from a table or ledge.

In a Nutshell: An interactive dinosaur that can communicate, move, and play music.

Monty T-Rex stomps and shows off his mighty fierce roar.
Life-like, With Built-in Touch and Sound Sensors
Monty T-Rex moves and communicates through his six built-in touch and sound sensors that are located on his face, back, and tail. Monty can walk and stomp; move his head, tail, and arms. He even dances along to any of his three built-in "dino rockin'" songs. To get Monty going, you merely have to touch his back, and if you forget to turn him off, he will go into sleep mode after 60-90 seconds.

Monty T-Rex is made of cloth and durable plastic, but as a fair warning he should always be used on a flat surface since he could potentially walk or stomp his way off a table and hurt himself.

Last updated: January 21, 2021 at 18:02 EST. Pricing information is provided by the listed merchants. GoSale.com is not responsible for the accuracy of pricing information, product information or the images provided. Product prices and availability is subject to change. Any price and availability information displayed on merchants at the time of purchase will apply to the purchase of the product. As always, be sure to visit the merchant's site to review and verify product information, price, and shipping costs. GoSale.com is not responsible for the content and opinions contained in customer submitted reviews.