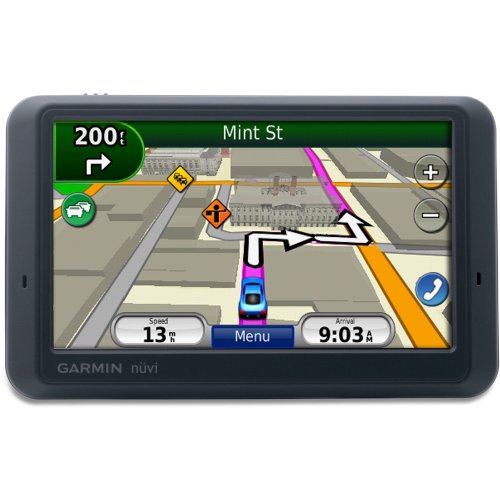 Factory Refurbished by Garmin with Warranty, all accessories, manuals, and Garmin box. Don't want a refurbished model? Then check out the retail version of the Nuvi 765T here!
Features:Editorial Review
This is a refurbished GPS. Refurbished generally means that the unit has been returned to the manufacturer, who brings the navigator back to like new conditions. Some GPS may contain cosmetic blemishes.

Garmin continues to build up its nüvi 7xx series portable GPS navigators with its nüvi 765T, which adds a number of handy routing and communication features to an already impressive list of specs, including a 4.3-inch widescreen display, text-to-speech capabilities, media player, and FM transmitter for transmitting audio--including directions and MP3 music and audiobooks--from the device to your car radio.

Garmin's nüvis pack top of the line features into a slim form factor.. New to the nüvi 7x5 lineup is Garmin's HotFix satellite prediction (which locates your position quickly and precisely), Lane Assist (which provides lane guidance and junction views when possible), automatic time zone transitioning, and 3D Building views as well as Garmin Connect Photos to help you visually ascertain your position. Additionally, the nüvi 765T includes Bluetooth connectivity to your cell phone and free real-time traffic updates from Navteq (for the life of the device) via the included GTM 20 traffic receiver.

Last updated: June 03, 2020 at 08:14 EST. Pricing information is provided by the listed merchants. GoSale.com is not responsible for the accuracy of pricing information, product information or the images provided. Product prices and availability is subject to change. Any price and availability information displayed on amazon.com or other merchants at the time of purchase will apply to the purchase of the product. As always, be sure to visit the merchant's site to review and verify product information, price, and shipping costs. GoSale.com is not responsible for the content and opinions contained in customer submitted reviews.