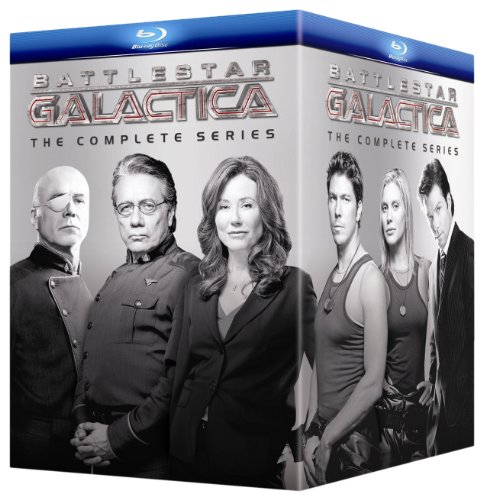 Features:Product Description
Now you can relive every action-packed moment of the epic story that Entertainment Weekly proclaims “Riveting”! Rejoin the fight to save the human race as a small but determined fleet quests for the fabled planet Earth while being hunted by their nemeses, the robot cylons. Presented uninterrupted and in Dolby Digital 5.1 Surround Sound, experience the phenomenon from beginning to end!

Editorial Review
Battlestar Galactica: Season One
Battlestar Galactica's Edward James Olmos wasn't kidding when he said "the series is even better than the miniseries." As developed by sci-fi TV veteran Ronald D. Moore, the "reimagined" BG is exactly what it claims to be: a drama for grown-ups in a science-fiction setting. The mature intelligence of the series is its greatest asset, from the tenuous respect between Galactica's militarily principled commander Adama (Olmos) and politically astute President Roslin (Mary McDonnell) to the barely suppressed passion between ace Viper pilot "Apollo" (a.k.a. Adama's son Lee, played by Jamie Bamber) and the brashly insubordinate Starbuck (Katee Sackhoff), whose multifaceted character is just one of many first-season highlights. Picking up where the miniseries ended (it's included here, sparing the need for separate purchase), season 1 opens with the riveting, Hugo Award-winning episode "33," in which Galactica and the "ragtag fleet" of colonial survivors begin their quest for the legendary 13th colony planet Earth, while being pursued with clockwork regularity by the Cylons, who've now occupied the colonial planet of Caprica. The fleet's hard-fought survival forms (1) the primary side of the series' three-part structure, shared with (2) the apparent psychosis of Dr. Gaius Baltar (James Callis) whose every thought and move are monitored by various incarnations of Number Six (Tricia Helfer), the seemingly omniscient Cylon ultravixen who follows a master plan somehow connected to (3) the Caprican survival ordeal of crash-landed pilots "Helo" (Tahmoh Penikett) and "Boomer" (Grace Park), whose simultaneous presence on Galactica is further evidence that 12 multicopied models of Cylons, in human form, are gathering their forces.

With remarkably consistent quality, each of these 13 episodes deepens the dynamics of these fascinating characters and suspenseful situations. While BG relies on...

Last updated: June 07, 2020 at 05:10 EST. Pricing information is provided by the listed merchants. GoSale.com is not responsible for the accuracy of pricing information, product information or the images provided. Product prices and availability is subject to change. Any price and availability information displayed on amazon.com or other merchants at the time of purchase will apply to the purchase of the product. As always, be sure to visit the merchant's site to review and verify product information, price, and shipping costs. GoSale.com is not responsible for the content and opinions contained in customer submitted reviews.