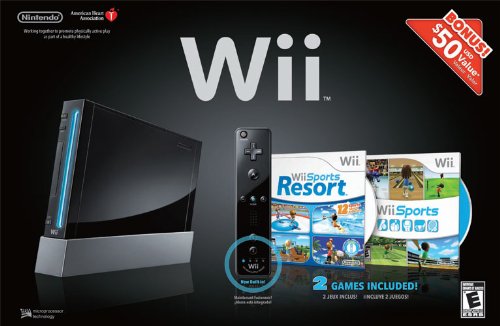 Features:Product Description
Includes Black Wii Console, Black Wii Remote Plus, Black Nunchuk, Wii Sports and Wii Sports Resort. Wii Sports Resort takes the inclusive, fun and intuitive controls of the original Wii Sports to the next level, introducing a whole new set of entertaining and physically immersive activities. With the deep control enhancements of Wii MotionPlus, veteran Wii users and newcomers alike can enjoy unprecedented gaming precision as they cruise on a water scooter, duel with swords, throw a Frisbee and much more.


The Wii with Wii Sports Resort and Wii Remote Plus Controller bundle is an expansion of the motion controlled video gaming revolution that Nintendo began with the release of the Wii console back in 2006. The bundle consists of a stylish black Wii console, matching black versions of the ultra motion sensitive Wii Remote Plus controller, Nunchuk controller, and a copy of both Wii Sports Resort and the original Wii Sports game. The console supports all former controller configurations used by Wii and with the now standard advanced capabilities of the the Wii Remote Plus controller provides new and more experienced player with the ultimate new way to start or expand a Wii party in their homes. A Little Box With Plenty of Power

As with every console, much of the buzz about Wii revolves around its specs. The Wii boasts 512 MB of internal flash memory, two USB 2.0 ports, and a slot for SD memory expansion. The system's technological heart -- a processing chip developed with IBM and code-named "Broadway" and a graphics chipset from ATI code-named "Hollywood" -- deliver stunning performance. And instead of a tray, Wii uses a single, self-loading media bay that plays both 12-centimeter optical discs used for the new system, as well as Nintendo GameCube discs. An additional, and often overlooked, benefit of the Wii is that it uses a fraction of the power of other current gaming consoles on the market, saving energy and money both when it is on and off. The ultimate Wii Sports bundle.
The functionality of the original Wii Remote and the Wii MotionPlus accessory in a new single controller.
Wii...
[+] Read More

Last updated: January 26, 2021 at 09:46 EST. Pricing information is provided by the listed merchants. GoSale.com is not responsible for the accuracy of pricing information, product information or the images provided. Product prices and availability is subject to change. Any price and availability information displayed on merchants at the time of purchase will apply to the purchase of the product. As always, be sure to visit the merchant's site to review and verify product information, price, and shipping costs. GoSale.com is not responsible for the content and opinions contained in customer submitted reviews.