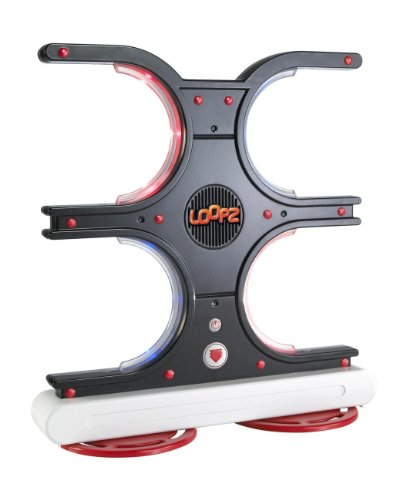 
Loopz™ is a skill and action music memory game that really gets kids moving! This interactive device consists of 4 semi-circular rings. The “loops” flash with ever-quickening patterns of light and music which players must mimic by waving their hands through the corresponding loops. Motion sensors in each loop read the action to ensure each sequence was repeated correctly. The longer you play, the faster it gets! Stay alert—miss 3 times and you're out! An internal counter measures each player's speed, level and rates their overall performance. Loopz™includes 7 different games that can be played solo, head-to-head or with up to 4 players.

Editorial Review
REVIEW: Designed for single-player fun or multiplayer action, Loopz is a high-energy music memory game that tests kids' skills and gets them moving. This interactive game takes the basic premise of Simon Says and dresses it up with a slick soundtrack and seven challenging modes. Players aged 7 and up will test and strengthen their memory, flexibility, and rhythm with musical play.

The Challenging: Some games have limited challenge levels.

In a Nutshell: An interactive music memory game that tests kids' skills and gets them moving.

An Interactive Music Memory Game with Motion Sensors
The unique Loopz game device features four semi-circular rings arranged in a four-square pattern. Each is outfitted with a motion sensor that detects movement. Gameplay involves players mimicking the pulsing light and music patterns by waving their hands in and out of the loops in an accurate, timely fashion.

If you miss three times, you're out, but if you hang on, the patterns will become faster and more involved. Loopz has an internal counter that tracks your speed and difficulty level throughout the game and will...

Last updated: January 25, 2021 at 00:17 EST. Pricing information is provided by the listed merchants. GoSale.com is not responsible for the accuracy of pricing information, product information or the images provided. Product prices and availability is subject to change. Any price and availability information displayed on merchants at the time of purchase will apply to the purchase of the product. As always, be sure to visit the merchant's site to review and verify product information, price, and shipping costs. GoSale.com is not responsible for the content and opinions contained in customer submitted reviews.

Find similar products to the Loopz by Mattel

Name:
Loopz by Mattel
Manufacturer:
Mattel
Made in:
China