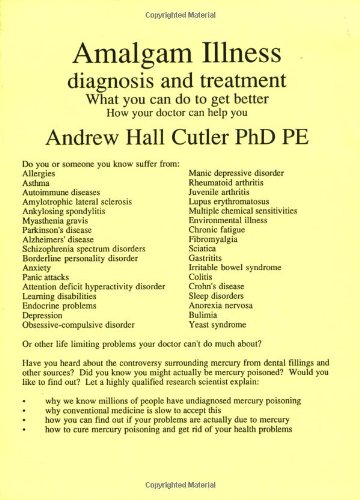 Amalgam Illness, Diagnosis and Treatment : What You Can Do to Get Better, How Your Doctor Can Help

Amalgam Illness, Diagnosis and Treatment : What You Can Do to Get Better, How Your Doctor Can Help

Editorial Review
Amalgam Illness: Diagnosis and Treatment starts with a detailed explanation of why to consider amalgam illness to be something that some people must have by comparing the well known statistics for how much mercury people absorb from their fillings to the well known statistics of how sensitive different members of a population are to a given toxin. This is for people who really don't know if they believe in amalgam illness or not (the other material available is rather sensational and I can't blame anyone reading it for having questions) before going any further.

Amalgam Illness: Diagnosis and Treatment discusses how to deal with physicians if you think you have a controversial disease - especially if you have the great "luck" to be covered by a managed care plan.

A key section is devoted to diagnosis - how to tell if you actually have amalgam illness instead of something else. It is also possible to be mercury poisoned from something other than amalgam, and the testing and examination described here is diagnostic regardless of the source.

How to get the dental work done safely if you have decided amalgam fillings are the problem is briefly described - there is a robust industry of amalgam free dentists if you know how to look for them.

The use of drugs and nutritional supplements to get the mercury out of your system is carefully presented - there are some important factors here that are not well described in the previous books on the subject and not all physicians who claim they know what to do actually give good advice.

Then comes what turns out to be the major section of the book - how to treat all the related health conditions amalgam illness can cause so as to relieve them while mercury detoxification proceeds. Since amalgam illness is not widely recognized in the medical community, most people with it get pretty sick before they get motivated to bounce around between doctors and eventually end up in front of one who tells them about it. So most victims have pretty serious, unpleasant health problems (like fibromyalgia or severe allergies) and they really need to make these STOP for the year or two it can take to get fully detoxed and let your body heal.

There are extensive tables of what to use for different conditions, a description of all the drugs and nutritional supplements suggested in the book, and appendices covering things like what the assorted clinical laboratory tests you might get actually mean, what other...

Set Price Alert
Set Price Alert
Searching Stores
Found at 0 Stores
Last updated: January 23, 2020 at 11:41 EST. Pricing information is provided by the listed merchants. GoSale.com is not responsible for the accuracy of pricing information, product information or the images provided. Product prices and availability is subject to change. Any price and availability information displayed on amazon.com or other merchants at the time of purchase will apply to the purchase of the product. As always, be sure to visit the merchant's site to review and verify product information, price, and shipping costs. GoSale.com is not responsible for the content and opinions contained in customer submitted reviews.

Find similar products to the Amalgam Illness, Diagnosis and Treatment : What You Can Do to Get Better, How Your Doctor Can Help