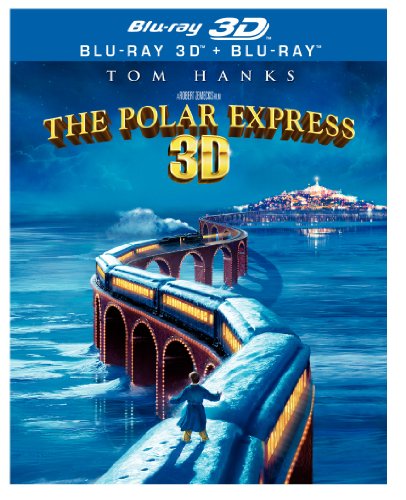 Features:Product Description
All the enchantment, all the adventure, all the joy of The Polar Express – all in astonishing true Blu-ray 3D! This instant holiday classic filmed in performance-capture animation by Robert Zemeckis and starring Tom Hanks now delivers a whole new cargoload of immersive Blu-ray™ magic. Reach out and grab your ticket as the exciting next dimension in home entertainment transports you to the North Pole in amazing fashion!

Editorial Review
Destined to become a holiday perennial, The Polar Express also heralded a brave new world of all-digital filmmaking. Critics and audiences were divided between those who hailed it as an instant classic that captures the visual splendor and evocative innocence of Chris Van Allsburg's popular children's book, and those who felt that the innovative use of "performance capture"--to accurately translate live performances into all-digital characters--was an eerie and not-quite-lifelike distraction from the story's epic-scale North Pole adventure. In any case it's a benign, kind-hearted celebration of the yuletide spirit, especially for kids who have almost grown out of their need to believe in Santa Claus. Tom Hanks is the nominal "star" who performs five different computer-generated characters, but it's the visuals that steal this show, as director Robert Zemeckis indulges his tireless pursuit of technological innovation. No matter how you respond to the many wonders on display, it's clear that The Polar Express represents a significant milestone in the digital revolution of cinema. If it also fills you with the joy of Christmas (in spite of its Nuremberg-like rally of frantic elves), so much the better. --Jeff Shannon

DVD features
The most intriguing feature on the two-disc DVD is probably the six-minute sequence featuring a new song performed by the two engine-room characters, Smokey and Steamer. The animation is crude and the song is nothing special, but it does preserve the dual performances of Michael Jeter (he played both characters), who passed away during filming. One of the striking aspects of The Polar Express is its use of motion-capture technology to turn real actors into animated characters, and that is examined in a significant portion of the five-part 11-minute featurette, in the "look at" Tom Hanks's multiple performances, and in an Easter egg that offers a side-by-side comparison of the actors in their motion-capture suits with the...
[+] Read More

Last updated: January 20, 2021 at 04:45 EST. Pricing information is provided by the listed merchants. GoSale.com is not responsible for the accuracy of pricing information, product information or the images provided. Product prices and availability is subject to change. Any price and availability information displayed on merchants at the time of purchase will apply to the purchase of the product. As always, be sure to visit the merchant's site to review and verify product information, price, and shipping costs. GoSale.com is not responsible for the content and opinions contained in customer submitted reviews.