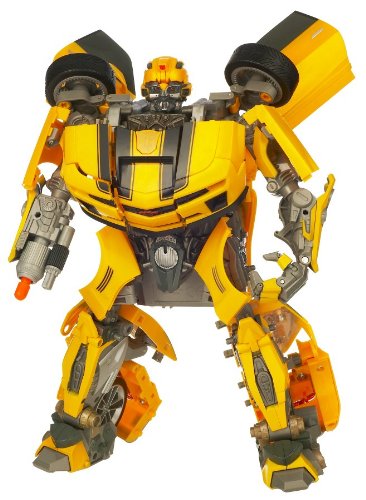 Features:Product Description
BUMBLEBEE stayed on Earth after the destruction of the AllSpark to continue protecting his friend Sam, and he has stayed with the young human every day since. As more DECEPTICONS have appeared to threaten Earth, the friendship between boy and robot has become something more. Now, human and AUTOBOT are teammates in a battle for the fate of the world, and neither will rest until every last DECEPTICON is a smoking wreck. The biggest robot star in the world is back! BUMBLEBEE is ready to roll into action against the DECEPTICONS with motion-activated lights and sounds. His robot and vehicle modes have been updated with the latest in movie-accurate detail, making this awesome robot cooler than ever! In robot mode, this friendly figure features light-up eyes and a flip-down battle mask to let the enemy know he means business! Animatronic arms, head and wings bring this awesome ally to life and ready for battle. With a cannon that automatically aims and fires, this trusty teammate will help you recreate exciting film scenes or stage new battles of your own. Convert the figure to a cool Camaro concept car in vehicle mode and roll out! With updated hood and grille detail, this guy certainly is a looker! Headlights and taillights complete his look, while revving engine sounds, horn and car alarm and even screeching brakes and crashing sounds let you know this sleek sidekick is on the move! The battle is on are you ready

Editorial Review
Based on Transformers: Revenge of the Fallen, the Hasbro Transformers Ultimate Bumblebee Figure is the premium movie-adapted Transformers toy on the market. Designed for ages five and older, and standing an impressive 14 inches tall, this action figure is more than deserving of the title "Ultimate." With a sleek design, battle and conversation sounds, and advanced animatronics system, Ultimate Bumblebee is an ideal toy for serious Transformers collectors.

Last updated: April 08, 2020 at 10:06 EST. Pricing information is provided by the listed merchants. GoSale.com is not responsible for the accuracy of pricing information, product information or the images provided. Product prices and availability is subject to change. Any price and availability information displayed on amazon.com or other merchants at the time of purchase will apply to the purchase of the product. As always, be sure to visit the merchant's site to review and verify product information, price, and shipping costs. GoSale.com is not responsible for the content and opinions contained in customer submitted reviews.