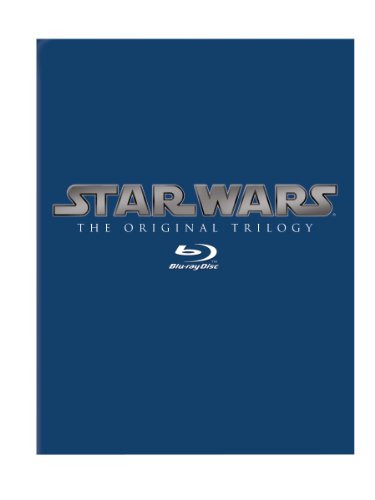 Star Wars Episode IV: A New Hope
Nineteen years after the formation of the Empire, Luke Skywalker is thrust into the struggle of the Rebel Alliance when he meets Obi-Wan Kenobi, who has lived for years in seclusion on the desert planet of Tatooine. Obi-Wan begins Luke's Jedi training as Luke joins him on a daring mission to rescue the beautiful Rebel leader Princess Leia from the clutches of the evil Empire.

Star Wars Episode V: The Empire Strikes Back
In this installment, Luke Skywalker and his friends have set up a new base on the ice planet of Hoth, but it is not long before their secret location is discovered by the evil Empire. After narrowly escaping, Luke splits off from his friends to seek out a Jedi Master called Yoda. Meanwhile, Han Solo, Chewbacca, Princess Leia, and C-3PO seek sanctuary at a city in the Clouds run by Lando Calrissian, an old friend of Han’s. But little do they realize that Darth Vader already awaits them.

Star Wars Episode VI: Return of the Jedi
(4 years after Episode IV) In the epic conclusion of the saga, the Empire prepares to crush the Rebellion with a more powerful Death Star while the Rebel fleet mounts a massive attack on the space station. Luke Skywalker confronts Darth Vader in a final climactic duel before the evil Emperor.

Editorial Review
The Star Wars trilogy had the rare distinction of becoming more than just a series of movies, but a cultural phenomenon, a life-defining event for its generation. On its surface, George Lucas's original 1977 film is a rollicking and humorous space fantasy that owes debts to more influences than one can count on two hands, but filmgoers became entranced by its basic struggle of good vs. evil "a long time ago, in a galaxy far, far away," its dazzling special effects, and a mythology of Jedi Knights, the Force, and droids.

In the first film, Luke Skywalker (Mark Hamill) gets to live out every boy's dream: ditch the farm and rescue a princess (Carrie Fisher). Accompanied by the roguish Han Solo (Harrison Ford, the only principal who was able to cross over into stardom) and trained by Jedi master Obi-Wan Kenobi (Alec Guinness), Luke finds himself involved in a galactic war against the Empire and the menacing Darth Vader (David Prowse, voiced by James Earl Jones). The following film, The...

Last updated: March 06, 2021 at 18:10 EST. Pricing information is provided by the listed merchants. GoSale.com is not responsible for the accuracy of pricing information, product information or the images provided. Product prices and availability is subject to change. Any price and availability information displayed on merchants at the time of purchase will apply to the purchase of the product. As always, be sure to visit the merchant's site to review and verify product information, price, and shipping costs. GoSale.com is not responsible for the content and opinions contained in customer submitted reviews.