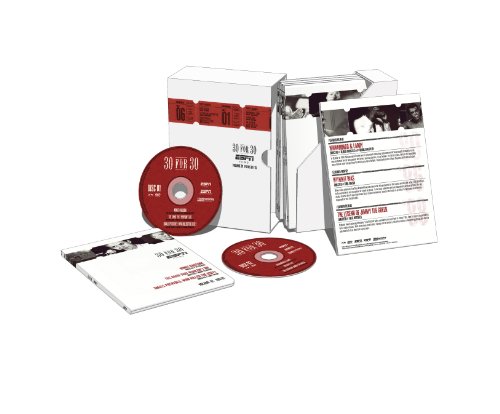 Product Description
In celebration of the ESPN 30th anniversary, ESPN Films presents 30 for 30 , a critically acclaimed series of films from some of todays finest directors. From Barry Levinson & Peter Berg to Steve James, Brett Morgen and Ice Cube, each filmmaker brings their unique perspective to an extraordinary sports story from the last 30 years. The New York Times calls the films entertaining and Time Magazine says it is a thrilling collection. ESPN has nailed it with this gripping series (The Los Angeles Times). Multiple films have received official selections from the Sundance, Toronto, Tribeca and South by Southwest Film Festivals, making this collection of remarkable films a must-have for any film fan. The ESPN 30 for 30 Gift Set, Volume 1, is a 6-disc set that includes the first 15 films from the series: Kings Ransom, The Band That Wouldnt Die, Small Potatoes: Who Killed The USFL, Muhammad & Larry, Without Bias, The Legend of Jimmy The Greek, The U, Winning Time: Reggie Miller vs. The New York Knicks, Guru of Go, No Crossover: The Trial of Allen Iverson, Silly Little Game, Run Ricky Run, The 16th Man, Straight Outta L.A. and June 17th, 1994. The Gift Set also includes over 2 hours of bonus features.

Last updated: August 08, 2020 at 09:53 EST. Pricing information is provided by the listed merchants. GoSale.com is not responsible for the accuracy of pricing information, product information or the images provided. Product prices and availability is subject to change. Any price and availability information displayed on amazon.com or other merchants at the time of purchase will apply to the purchase of the product. As always, be sure to visit the merchant's site to review and verify product information, price, and shipping costs. GoSale.com is not responsible for the content and opinions contained in customer submitted reviews.