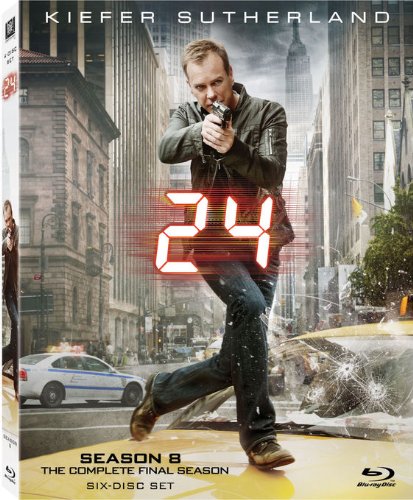 Product Description
Hang on for the adrenaline rush of a lifetime as Jack Bauer (Keifer Sutherland) unveils darker secrets, faces deadlier conspiracies, and is thrust into more extreme action than ever before in Season 8 of 24! As Day Eight unfolds, Bauer races against the clock to prevent the assassination of a Middle Eastern leader on a vital peace-making mission. Meanwhile, a deadly terrorist threat against New York City intensifies and builds towards an explosive climax. Relive the electrifying final season of TV's most groundbreaking series ever, including a must-see ending!

Editorial Review
Network television's most exciting series ends with a bang--a lot of bangs, in fact, along with multiple bams, whams, and booms---as 24 bows out with this six-disc set of episodes from its eighth and final season. As the action begins in New York City, Jack Bauer (Kiefer Sutherland), now a grandfather, has retired from his gig at the Counter Terrorist Unit (CTU) and plans to move to California to be with his family. Yeah, right. When he learns of a plot to assassinate President Omar Hassan (Anil Kapoor) of the mythical Islamic Republic of Kamistan--who's set to join the U.S. president, Allison Taylor (Cherry Jones), and the Russian leader at the United Nations, where they will sign a historic agreement that will end Kamistan's nuclear program and bring lasting peace to the Middle East--Jack leaps right back into the fray. Needless to say, the plot thickens faster than the pools of congealed blood he inevitably leaves in his deadly wake. Who's behind the assassination scheme Is it Hassan's power-hungry brother, who has no desire to give up his country's nukes, or is he in cahoots with bigger, more sinister forces Are there even CTU operatives involved in these dastardly machinations Can Jack trust a single soul other than himself That he will get to the bottom of all of this (or the top, as a central conspiracy reaches to the very highest government levels) is a given. That he will...
[+] Read More

Last updated: August 08, 2020 at 09:52 EST. Pricing information is provided by the listed merchants. GoSale.com is not responsible for the accuracy of pricing information, product information or the images provided. Product prices and availability is subject to change. Any price and availability information displayed on amazon.com or other merchants at the time of purchase will apply to the purchase of the product. As always, be sure to visit the merchant's site to review and verify product information, price, and shipping costs. GoSale.com is not responsible for the content and opinions contained in customer submitted reviews.