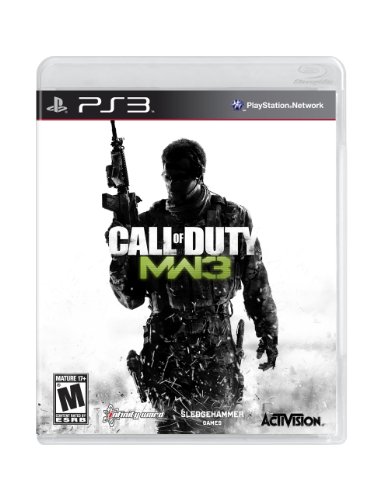 Product Description
Modern Warfare is back. On November 8th, the best-selling first person action series of all-time returns with the epic sequel to the multiple Game of the Year award winner Call of Duty: Modern Warfare 2.

Call of Duty: Modern Warfare 3 is a direct sequel to the previous game in the series, Call of Duty: Modern Warfare 2. In the game's single player campaign Russian Ultranationalist Vladimir Makarov continues his manipulation of Russian Federation forces in their invasion of the United States and Europe. In their way stands characters like Task Force 141 Captain John "Soap" MacTavish, former SAS Captain John Price as well as new playable characters from Delta Force and the British SAS. Engage enemy forces in New York, Paris, Berlin and other attack sites across the globe. The world stands on the brink, and Makarov is intent on bringing civilization to its knees. In this darkest hour, are you willing to do what is necessary. Multiplayer That is Bigger and Better Than Ever

Call of Duty: Modern Warfare 3 delivers a multiplayer experience that continues to raise the bar by focusing on fast-paced, gun-on-gun combat, along with innovative features that support and enhance a large variety of play-styles. Now, you can truly define your approach with a toolkit more expansive than any previous title. Continue the Call of Duty: Modern Warfare in the third release in the series.
View larger Best in class multiplayer action.
View larger Pointstreaks and Strike Packages

Killstreaks, benefits and abilities awarded for stringing together multiple kills, have been transformed into Pointstreaks, creating a system that rewards players both for landing kills and completing objectives. These rewards have...
[+] Read More

Last updated: May 28, 2020 at 01:27 EST. Pricing information is provided by the listed merchants. GoSale.com is not responsible for the accuracy of pricing information, product information or the images provided. Product prices and availability is subject to change. Any price and availability information displayed on amazon.com or other merchants at the time of purchase will apply to the purchase of the product. As always, be sure to visit the merchant's site to review and verify product information, price, and shipping costs. GoSale.com is not responsible for the content and opinions contained in customer submitted reviews.