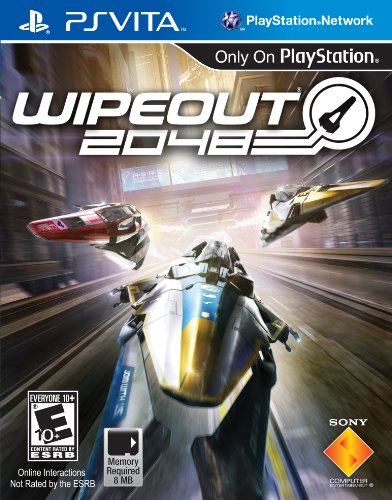 
WipEout 2048 is a high-speed, high-energy multiplayer Racing game releasing as a launch title concurrently with the PlayStation Vita. Set in the year 2048, the game is chronologically a prequel to earlier releases in the series, introducing longtime fans of the game series as well as new players to the beginnings of the addictive futuristic sport of antigravity racing. The game utilizes PlayStation Vita's innovative touch interface, motion active tilt, and voice-activated controls to create a fluid high-end racing experience that players can take anywhere. Additional features include: eight player support that includes races against PS3 players of Wipeout HD on PlayStation Network, co-op mission play and wider tracks designed to increase players' focus on weapons and maneuverability. Heart-pounding Wipeout antigravity racing comes to PlayStation Vita.
View larger Antigravity Racing Comes to PlayStation Vita

In Wipeout 2048 players experience the thrill and speed of aggressive, antigravity racing in the palm of their hand via the PlayStation Vita. One of the most exciting launch titles releasing concurrently with the PS Vita, Wipeout 2048 retains the frenetically-paced, futuristic racing action and vehicular combat that has thrilled and challenged fans of the series, while also upping the ante by harnesses the PS Vita's enhanced controls. These include motion active tilt, touch interface and even voice-activated commands. Filled with fast-paced, futuristic racing action and wireless connectivity, Wipeout 2048 is a never-ending battle to stay atop the online leaderboards. Multiplayer Options That...
[+] Read More

Last updated: June 02, 2020 at 13:47 EST. Pricing information is provided by the listed merchants. GoSale.com is not responsible for the accuracy of pricing information, product information or the images provided. Product prices and availability is subject to change. Any price and availability information displayed on amazon.com or other merchants at the time of purchase will apply to the purchase of the product. As always, be sure to visit the merchant's site to review and verify product information, price, and shipping costs. GoSale.com is not responsible for the content and opinions contained in customer submitted reviews.