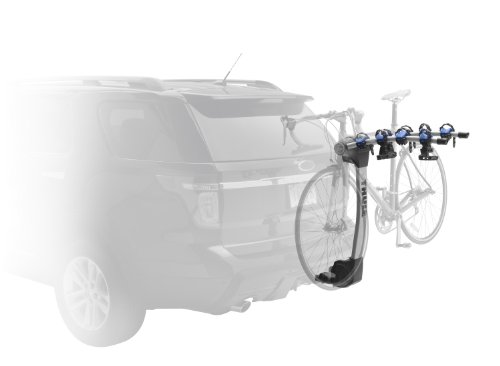 
The Thule 9025 Apex four-bike hitch mount carrier transports up to four bicycles securely at the rear of vehicles, while allowing access to rear door hatchbacks by leaning the carrier back when not loaded. The carrier is compatible only with 1-1/4" and 2" hitch receivers. Additional features include: an integrated hitch pin, bike arms designed along an arc for easier loading and carrying performance, increased mast height, Thule Hold Fast cradles and No-Sway cages, the ability to fold arms down flat, bike and rack security from theft with included hitch and cable locks, and an integrated carrying handle. Stable hitch mount receiver stowage for four bikes while maintaining access to rear vehicle openings.
View larger Four-Bike Hitch Receiver Carrying Capacity

The Thule 9025 Apex four-bike hitch mount carrier is designed for frequent cyclists and/or families that want the stability, and functionality of a hitch receiver carrier that can be left on vehicles when bikes are not loaded without interfering with hatchbacks. The carrier is compatible with 1-1/4" and 2" hitch receivers and has a four-bike carrying capacity managed by its two retractable bike support arms that curve along an arc. The naturally supportive arc design of the bike arms allows for easier bike loading and carrying performance. Thule Hold Fast cradles are installed on the arms. They feature a soft, rubberized cradle with a groove design that accommodates bike cables, cushions bikes and secures them during transport. To provide maximized bike stability, bike arms also feature patented Thule No-Sway cages. No-sway cages are rigid rubberized bike rack components that attach to the lower edge...
[+] Read More

Last updated: February 26, 2020 at 17:17 EST. Pricing information is provided by the listed merchants. GoSale.com is not responsible for the accuracy of pricing information, product information or the images provided. Product prices and availability is subject to change. Any price and availability information displayed on amazon.com or other merchants at the time of purchase will apply to the purchase of the product. As always, be sure to visit the merchant's site to review and verify product information, price, and shipping costs. GoSale.com is not responsible for the content and opinions contained in customer submitted reviews.