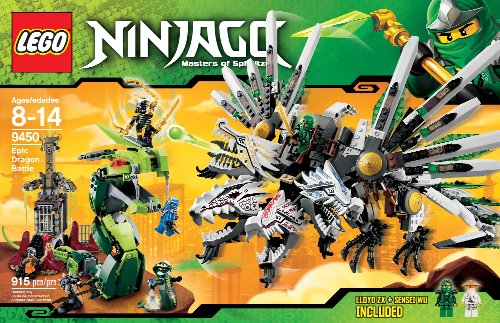 Features:Product Description
Defeat the Great Devourer in the epic battle between good versus evil! The epic battle of good versus evil has begun! The Great Devourer has been awakened and threatens to devour the world of Ninjago. Can the legendary green ninja, riding the awesome 4-headed Ultra Dragon, overpower this evil adversary Can Lord Garmadon harness the power of the 4 golden weapons of Spinjitzu to destroy the mighty snake and what about Sensei Wu Can Jay defeat the evil snake Generals Acidicus, Skalidor and snake soldier Chokun to release his master from the impenetrable snake prison Only you can decide the outcome of the final battle between good and evil! Includes 7 minifigures: Lloyd ZX, Jay ZX, Sensei Wu, Lord Garmadon, Acidicus, Skalidor and Chokun. Set features 4-headed Ultra Dragon, The Great Devourer, snake prison, Hypnobrai fang blade with blue anti-venom capsule, 4 golden weapons and 7 regular weapons.


Take part in an epic, ninja-themed battle between good and evil with the LEGO Ninjago Epic Dragon Battle. Inspired by the popular Ninjago TV show, this enormous set transports builders to a world filled with brave ninjas, mythical dragons, and giant serpents. The set includes eight minifigures and several pieces that can't be found anywhere else, making it an essential choice for any avid LEGO collector. And with over 900 pieces, it provides a healthy challenge for builders of all skill levels.The four-headed Ultra Dragon is the centerpiece of this set. Includes eight minifigures modeled after some of the show's most popular characters. The Great Devourer serpent has snapping jaws and a moveable body. Cage minifigures in the Serpentine prison. Enormous LEGO Set with Plenty of Interactive Parts

With over 900 pieces, the Epic Dragon Battle set is one of the largest Ninjago sets ever created. The centerpiece of the set is the Ultra Dragon--a massive, feathered dragon that can launch a green "zamor" sphere from each of its four heads.

Last updated: January 22, 2021 at 00:56 EST. Pricing information is provided by the listed merchants. GoSale.com is not responsible for the accuracy of pricing information, product information or the images provided. Product prices and availability is subject to change. Any price and availability information displayed on merchants at the time of purchase will apply to the purchase of the product. As always, be sure to visit the merchant's site to review and verify product information, price, and shipping costs. GoSale.com is not responsible for the content and opinions contained in customer submitted reviews.