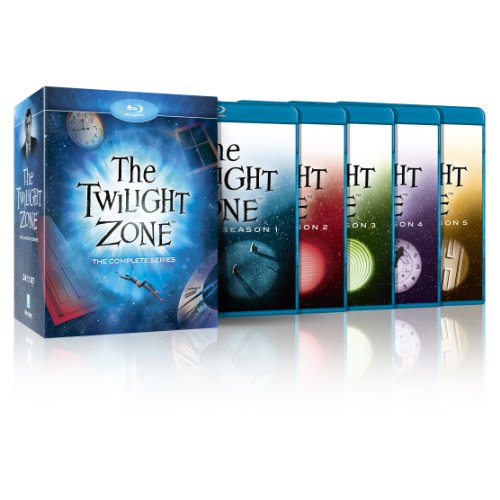 Product Description
All 156 episodes in pristine high-definition of Rod Serling's classic, groundbreaking series in one box set! Travel to another dimension of sight and sound again and again through these stellar remastered high-definition film transfers.

Submitted for your approval: The Twilight Zone's inaugural season, all 36 episodes complete with Rod Serling's original promos for the following week's episode, not seen since their original broadcast. To discuss television's greatest anthology series whose title has become pop culture shorthand for the bizarre and supernatural is to immediately become like Albert Brooks and Dan Aykroyd in Twilight Zone: The Movie; a can-you-top-this recall of famous shocks and favorite twists. Several essential episodes hail from this season, among them, "Time Enough at Last" starring Burgess Meredith as a bespectacled bookworm who is the lone survivor of an atomic blast; "The After-Hours" starring Anne Francis as a department store shopper haunted by mannequins; and the profoundly disturbing "The Monsters Are Due on Maple Street," in which fear and prejudice turns neighbor against neighbor (and, by the by, whose alien observers inspired Kang and Kodos on The Simpsons).

From an unsettlingly persistent hitchhiker to a malevolent slot machine, The Twilight Zone's first season did plumb "the pit of man's fears." One forgets how moving the series could be. Three of this season's most memorable and enduring episodes are the poignant and primal "stop-the-world-I-want-to-get-off fantasies, "Walking Distance," "A Stop at Willougby" and "The Sixteen-Millimeter Shrine," in which desperate characters seek refuge in a simpler past. Serling's few stabs at comedy ("Mr. Bevis," "The Mighty Casey") have not aged well, but the series finale, "A World of His Own," starring Keenan Wynn as a playwright whose fictional characters come to life, has a brilliant capper. The episodes are more deliberately paced than one might remember. Less patient younger viewers might be anxious to get to the payoffs, but once they settle into the rhythm, they will savor the literate writing and the performances by such veteran actors as Ed Wynn, Everett Sloan, and Ida Lupino, and newcomers such as Jack Klugman. The extras, including the unaired version of the pilot episode, "Where is Everybody", audio commentaries and recollections, and a Serling college lecture, truly take this...

Set Price Alert
Set Price Alert
Read Reviews
Searching Stores
Found at 0 Stores
Last updated: February 17, 2020 at 06:59 EST. Pricing information is provided by the listed merchants. GoSale.com is not responsible for the accuracy of pricing information, product information or the images provided. Product prices and availability is subject to change. Any price and availability information displayed on amazon.com or other merchants at the time of purchase will apply to the purchase of the product. As always, be sure to visit the merchant's site to review and verify product information, price, and shipping costs. GoSale.com is not responsible for the content and opinions contained in customer submitted reviews.

Find similar products to the The Twilight Zone: The Complete Series (Blu-ray)