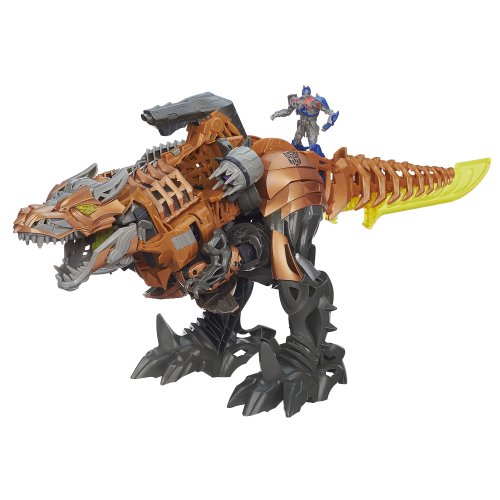 Grimlock is the biggest, baddest beast in the Transformers universe. This Stomp and Chomp Grimlock toy brings home the power of the mighty Dinobot warrior! Create awesome Transformers battle action with this giant T-Rex figure that converts from robot to dino and back in one awesome step! Place the included Optimus Prime figure on the dino's back to activate lights, sounds, and pop-out weapons. You can imagine the two Transformers robots are riding into battle together!

'Grimlock smash!' The Dinobot leader Grimlock is a legendary warrior known for unrivaled feats of destruction. The rampaging dino can level anything in his path with thundering strength and crushing jaws. Get a toy worthy of the mighty T-Rex with this Stomp and Chomp Grimlock figure that stands 20 inches tall. It's the largest Dinobot toy created! Don't let its size fool you - your Stomp and Chomp Grimlock figure converts quickly and easily. Switch between robot and T-Rex modes in one awesome step. Use the included Optimus Prime robot figure to activate the dino's lights, sounds, and weapons, and pretend you're battling Decepticons in the Transformers: Age of Extinction movie.

There's never been a more powerful Transformers team-up than the Autobot leader Optimus Prime riding into battle on the back of the Dinobot leader Grimlock. With this Stomp and Chomp Grimlock figure, you can re-create that epic alliance. Place the included Optimus Prime figure on the dino's back to activate sounds, light-up eyes, and pop-out weapons. The battle-activation feature works with other Age of Extinction figures, including 1-Step Changers figures and Power Battlers figures. Your Stomp and Chomp Grimlock figure recognizes whether the figure on its back is an Autobot or Decepticon character and will activate different lights, sounds, and weapons depending on which side you choose! Collect your favorite characters, choose your side, and join the battle against...

Set Price Alert
Set Price Alert
Read Reviews
Searching Stores
Found at 0 Stores
Last updated: February 17, 2020 at 13:34 EST. Pricing information is provided by the listed merchants. GoSale.com is not responsible for the accuracy of pricing information, product information or the images provided. Product prices and availability is subject to change. Any price and availability information displayed on amazon.com or other merchants at the time of purchase will apply to the purchase of the product. As always, be sure to visit the merchant's site to review and verify product information, price, and shipping costs. GoSale.com is not responsible for the content and opinions contained in customer submitted reviews.