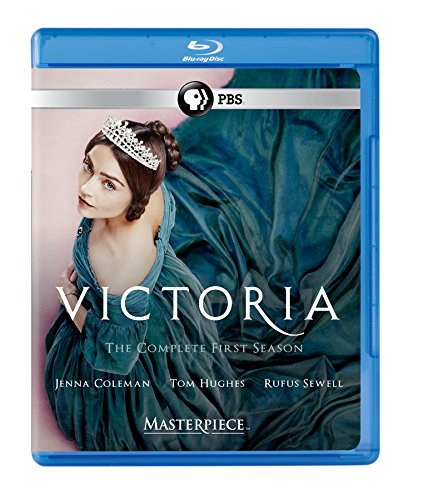 Product Description
Created by Daisy Goodwin, this ambitious drama presents the early years of one of history's greatest monarchs. Stretching from the upper echelons of the royal court to the below-stairs staff, this is a story of passionate affairs, power struggles, and unrequited love, at the center of which stands the new Queen (Jenna Coleman) a strong, complex, and willful woman who must, somehow, become an enduring icon.

Victoria Season 3 - DVD - Region 1 (US & Canada). Created and written by Daisy Goodwin, this incredible series returning for a third season is a landmark account of the life of one of history's greatest monarchs. With monarchies tumbling in Europe, Queen Victoria (Jenna Coleman) and Albert (Tom Hughes) must confront what it means to rule in this new era. Constitutional crises, scandals, and a decade of marriage mean Victoria is tested like never before; as mother, wife, and Queen. Drawing on real-life events and the Queen's own exhaustive diaries to paint a vivid portrait of her transformation from an impulsive 18-year-old to her early years as wife, mother, and head of a global empire. 8 episodes, 8 hours, 3 DVD or blu-ray discs. Ships April 16, 2019 We regret we cannot ship Victoria Season 3 to Canada. DVD - Region 1 (US & Canada) 0 0 0 0 While we aim to supply accurate product information, it is sourced by manufacturers, suppliers and marketplace sellers, and has not been provided by Overstock.

Jenna Coleman ("Doctor Who," "Death Comes to Pemberley") stars as young Queen Victoria in this lavish new costume drama from Britain's ITV, soon to air on Masterpiece." Beautifully filmed, exquisitely costumed, it won raves when it aired in the UK and eased the pain of viewers who were pining for "Downton Abbey." Series 1 follows the diminutive Victoria from her accession to the throne at age 18 through her courtship and marriage to Prince Albert. With Tom Hughes ("Silk") as Albert and Rufus Sewell ("Middlemarch") as Victoria's broodingly handsome confidant, Lord Melbourne. "Jenna Coleman excels. stellar performance" (Express, UK). 8 episodes, 8 hrs, Choose 3 DVDs or Blu-ray discs, SDH.
[+] Read More

Last updated: May 25, 2020 at 11:32 EST. Pricing information is provided by the listed merchants. GoSale.com is not responsible for the accuracy of pricing information, product information or the images provided. Product prices and availability is subject to change. Any price and availability information displayed on amazon.com or other merchants at the time of purchase will apply to the purchase of the product. As always, be sure to visit the merchant's site to review and verify product information, price, and shipping costs. GoSale.com is not responsible for the content and opinions contained in customer submitted reviews.