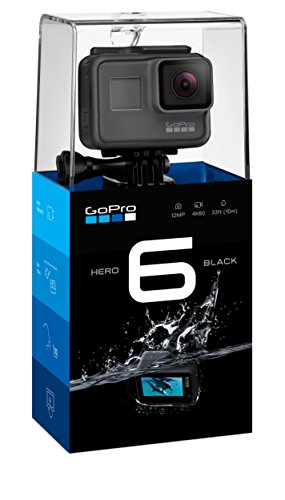 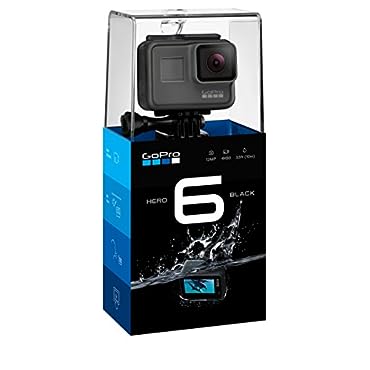 Features:Product Description
HERO6 Black transforms your adventures into incredible QuikStories right on your phone. With its all-new GP1 chip, next-level video stabilization and 2x the performance, looking good has never been so easy. Add voice control and a durable waterproof design, and HERO6 Black is the ultimate GoPro for sharing life as you live it.

GoPro Hero6 Black Camera. GoPro has done it again with the release of their new Hero6 Black camera - the most powerful and convenient GoPro yet that's, of course, packed into a rugged, waterproof, go-anywhere design. Powered by GoPro's custom-designed GP1 processor, the Hero6 achieves an entirely new level of performance including stunning 4K60 and 1080p240 video. Developed from the ground up to maximize a GoPro's capabilities, the GP1 processor enables twice the video frame rates, improved image quality, dynamic range, low-light performance, and dramatically improved video stabilization over previous Hero camera generations. Importantly, the GP1 automates all of these benefits, allowing users to capture vibrant videos and stunning photos without messing around with complex image settings. The GP1 also advances GoPro's capabilities in computer vision and machine learning, enabling the Hero6 to analyze visual scenes and sensor data for improved automated QuikStories, an app feature that makes it easy to share short videos of your adventures. The Hero6 is optimized for QuikStories with 3X faster WiFi. This means your footage will rapidly transfer from your GoPro to your phone where the GoPro App will automatically create QuikStory videos for you.

Last updated: February 23, 2020 at 14:54 EST. Pricing information is provided by the listed merchants. GoSale.com is not responsible for the accuracy of pricing information, product information or the images provided. Product prices and availability is subject to change. Any price and availability information displayed on amazon.com or other merchants at the time of purchase will apply to the purchase of the product. As always, be sure to visit the merchant's site to review and verify product information, price, and shipping costs. GoSale.com is not responsible for the content and opinions contained in customer submitted reviews.