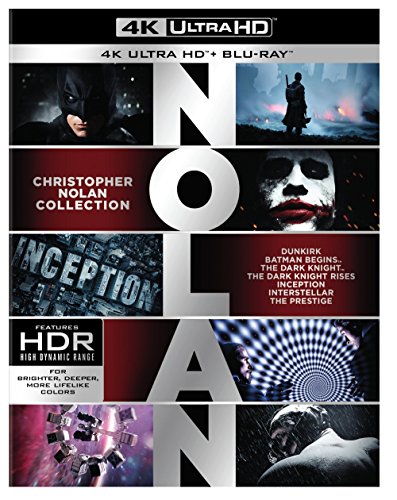 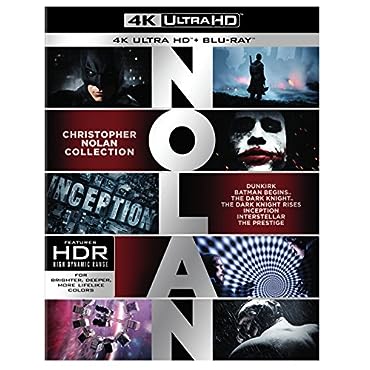 Dunkirk - Trapped on the beach with their backs to the sea, British and Allied troops are surrounded by enemy forces facing a fierce battle in World War II. Batman Begins - In the wake of his parents' murder, disillusioned industrial heir Bruce Wayne travels the world seeking the means to fight injustice.

Dunkirk: Dunkirk opens as hundreds of thousands of British and Allied troops are surrounded by enemy forces. Trapped on the beach with their backs to the sea, they face an impossible situation as the enemy closes in. 106 Mins. Batman Begins: After traveling the world seeking the means to fight injustice, Bruce Wayne returns to Gotham City and unleashes his alter ego, Batman, who uses strength, intellect and high-tech weaponry to fight evil. 140 Mins. The Dark Knight: Batman continues his war on crime with the help of Lt. Jim Gordon and Harvey Dent as rising criminal mastermind The Joker unleashes anarchy, forcing Batman closer to crossing the line between hero and vigilante. 153 Mins. The Dark Knight Rises: Eight years after Batman vanished into the night as a fugitive, things change with the arrival of a cunning cat burglar and the emergence of Bane, a ruthless terrorist who drives Bruce Waune out of exile. 165 Mins. Inception: Fugitive Dom Cobb is the best there is at extraction: stealing secrets from a dreamer's mind. Now he has a chance at inception - planting an idea into the subconscious - and success may mean his ticket home. 148 Mins. Interstellar: A team of explorers travel beyond this galaxy through a newly discovered wormhole to learn whether mankind has a future among the stars. 168 Mins. The Prestige: Two young, passionate magicians are partners until one fateful night, when a trick goes horribly wrong. Now the bitterest of enemies, they will stop at nothing, including sabotage, to learn each other's secrets. 132 Mins. Special Features: Includes Special Features on 7 Blu-ray Bonus Discs. Please note that this set isn't eligible for free shipping.
[+] Read More

Last updated: May 28, 2020 at 12:33 EST. Pricing information is provided by the listed merchants. GoSale.com is not responsible for the accuracy of pricing information, product information or the images provided. Product prices and availability is subject to change. Any price and availability information displayed on amazon.com or other merchants at the time of purchase will apply to the purchase of the product. As always, be sure to visit the merchant's site to review and verify product information, price, and shipping costs. GoSale.com is not responsible for the content and opinions contained in customer submitted reviews.