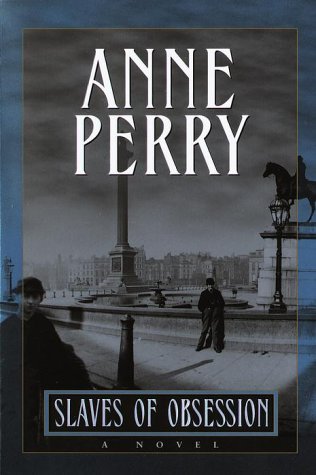 The year is 1861. The American Civil War has just begun, and London arms dealer Daniel Albertson is becoming a very wealthy man as emissaries from both sides of the conflict rush to purchase his wares. The quiet dinner party held by Albertson and his beautiful wife seems remote indeed from the passions rending America. Yet investigator William Monk and his bride, Hester, sense growing tensions and barely concealed violence in this well-appointed mansion. For two of the guests are Americans, each vying to buy Albertson's armaments.

Philo Trace, the Southerner, is both charming and intelligent, but a defender of slavery. Northerner Lyman Breelove is a disturbing blend of political zealot and personal reserve--to whom Albertson's teenage daughter has pledged her heart. Soon Monk and Hester's forebodings are fulfilled. For within this group, one is brutally murdered in a cruel ritualistic fashion, and two others disappear--along with Albertson's entire inventory of weapons.

Slaves of Obsession twists and turns like a powder keg fuse as Monk and Hester track the man they believe to be a cold-blooded murderer all the way to Washington D.C. and the bloody battlefield at Manassas. Yet finally, in a hushed London courtroom scene, Anne Perry holds her readers breathless and spellbound while Sir Oliver Rathbone fights to defend the innocent . . . and perhaps the guilty . . . from the hangman's noose.

Last updated: July 09, 2020 at 06:34 EST. Pricing information is provided by the listed merchants. GoSale.com is not responsible for the accuracy of pricing information, product information or the images provided. Product prices and availability is subject to change. Any price and availability information displayed on amazon.com or other merchants at the time of purchase will apply to the purchase of the product. As always, be sure to visit the merchant's site to review and verify product information, price, and shipping costs. GoSale.com is not responsible for the content and opinions contained in customer submitted reviews.

Find similar products to the Slaves of Obsession