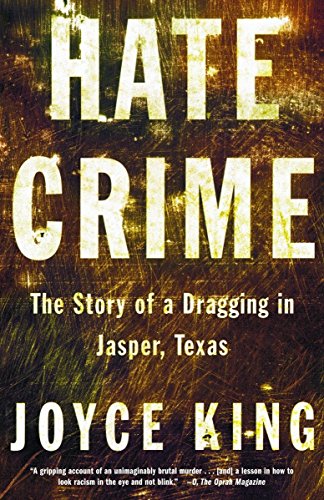 On June 7, 1998, James Byrd Jr., a forty-nine-year-old black man, was walking home from a party when three white men in a pickup truck offered him a ride. They drove Byrd out to a lonely country road, tied him to a logging chain, and dragged him three miles to his death.
Joyce King, an award-winning journalist and native Texan, was assigned to cover the story, which drew international media headlines. In Hate Crime, she provides a chilling re-creation of the slaying and the subsequent trials. But she also moves beyond the details of the case to provide insight into the minds of the murderers, and to investigate the Texas prison system in which they developed their virulent racism. King also explores how the town of Jasper, Texas, endured a tragedy that threatened to divide its residents. A first-rate work of reportage, Hate Crime is also a searing look at how race continues to shape life in America.
[+] Read More

Last updated: October 31, 2020 at 17:04 EST. Pricing information is provided by the listed merchants. GoSale.com is not responsible for the accuracy of pricing information, product information or the images provided. Product prices and availability is subject to change. Any price and availability information displayed on amazon.com or other merchants at the time of purchase will apply to the purchase of the product. As always, be sure to visit the merchant's site to review and verify product information, price, and shipping costs. GoSale.com is not responsible for the content and opinions contained in customer submitted reviews.